Too close to call at halfway stage

Lanzarote laid on superb conditions for day two of the RC44 Calero Marinas Cup, under brilliant sunshine and winds that started in the sub-10 knot range before building solidly into the early 20s, making for a spectacular, high speed, action-packed third and final race.

“That last race was great, full on,” said a windswept Team Aqua skipper, Chris Bake. “But it was full-on boat handling on the downwinds. The whole cockpit looked like spaghetti junction. It was Southern Ocean-esque.” 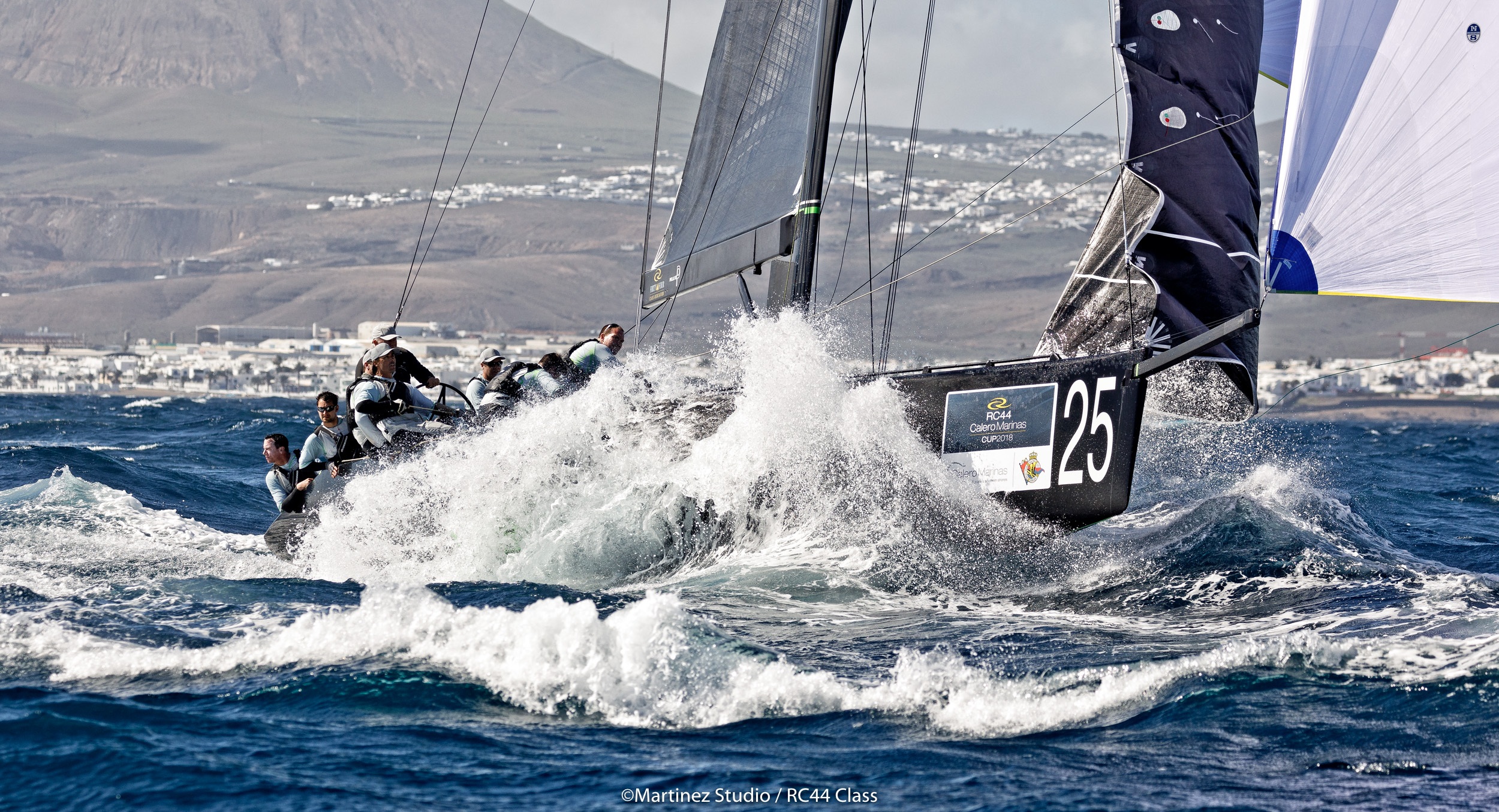 Thanks to the building breeze and the sea bed shelving away steeply to around 1.3 km off Lanzarote’s south coast, the seas off Arrecife were confused and mountainous. Nonetheless the experienced crew on Team Aqua was able to pull off its best result of this opening event of the 2018 RC44 season, scoring a close second place behind Vladimir Prosikhin’s Team Nika. However despite scoring good results in today’s last two races, Team Aqua is still lanquishing in sixth place overall after receiving two penalties and having had a disappointing first day.

Today’s top scoring boats were Team Nika and Nico Poons’ Charisma, which at this half way stage of the RC44 Calero Marinas Cup are tied on points for the lead, with Team Nika ahead on countback. The Russian and Dutch teams were particularly at each other’s throats in the second race. In this Nika led around the first lap but Charisma edged ahead by the end of the second beat, and held their lead to the finish.

“We beat them up on the last upwind leg,” observed Nico Poons with a grin. “The last race was more survival in 20+ knots. The downwinds were fun, but you had to really concentrate otherwise you’d end up upside down.

“It is always fun to get good results. We are more focussed this year. We have new sails but then everyone has... We’re on a level playing field and we’re quite constant which is most important. But we are only half way. On Sunday after the last race ask again how it is going!” 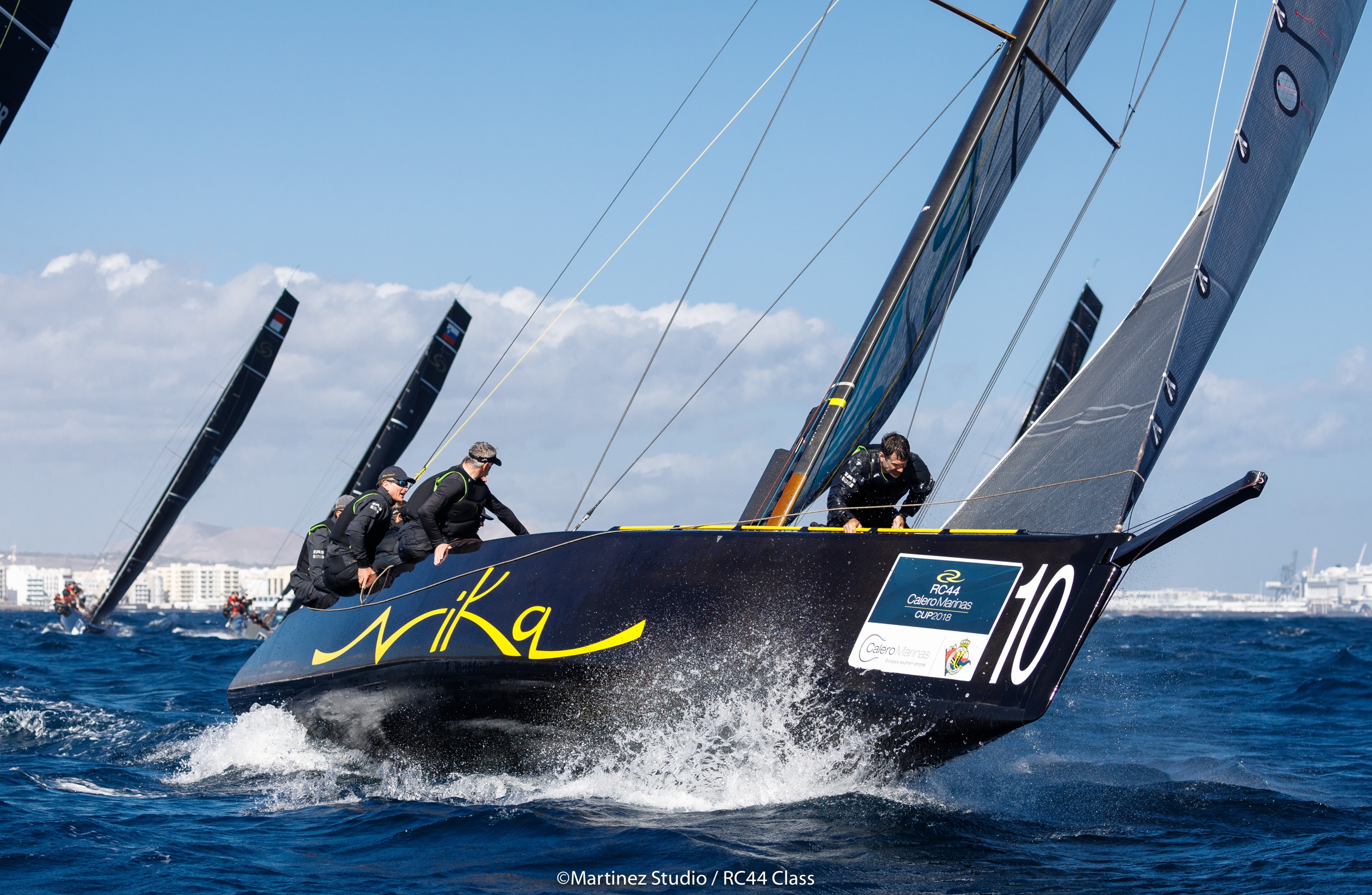 A possible cause of the heavyweight dust up Poons finds his boat in with Team Nika may be because of the rivalry his tactician Ray Davies has with his old Emirates Team New Zealand America’s Cup skipper Dean Barker, who is calling the moves on the Russian boat.

“It is great fun sailing against those guys - we are always very competitive amongst each other,” admitted Davies. “They are sailing and starting really well. We have a lot to improve in our starts and mark roundings - hopefully we can get a little bit more consistent there. But there are plenty of positives and I’m really happy with how the team is gelling and Nico is doing a good job. He is very relaxed.”

Once again Torbjörn Törnqvist’s Artemis Racing claimed the opening race, tactician Andy Horton correctly calling the favourable left side of the course, just as he did in yesterday’s first race. Initially this moved the Swedish America's Cup team into the lead overall, only for them to score deep results in today’s final two races. “The second race we had a great start and we came out on a clean lane, but then Aqua came and we had to duck them in a port-starboard situation. They got a penalty but we lost our lane,” said Törnqvist. Of today’s yee-haa final race he added: “It was exciting to do. We didn’t do too well on the downwind and we got into some difficult situations so the race didn’t go as well as we’d hoped. But we are still there in the hunt and it was a great day.”

While Team Nika and Charisma lead at the midway-point of the RC44 Calero Marinas Cup, Artemis Racing hold third overall, two points behind, while yesterday’s overall leader, John Bassadone’s Peninsula Petroleum, is a further two points back in fourth after a day the Gibraltar team would rather forget.

After a disappointing opening day Igor Lah’s defending champions on Team CEEREF are on the ascent and were third highest scoring boat of the day. The Slovenian team is now fifth overall.