With its strict one-design format the 44Cup is as level a playing field as you could wish to find in international yacht racing.

Venues across the globe are chosen for their excellent sailing conditions and racecourses that is often demanding of the helm. With three to four races per day over a four-day regatta, the 44Cup offers the fleet more racing each season than any other owner driven racing circuit. 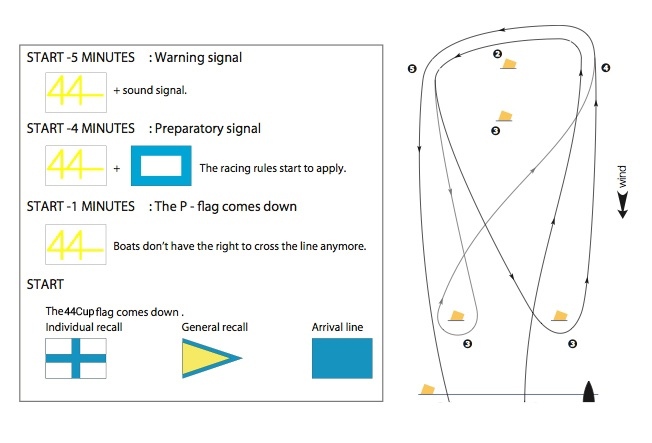 Chris Bake, owner of Team Aqua and five times 44Cup champion, comments on what keeps him coming back year on year: “The key aspects that first attracted me to this class still hold true - it’s one-design, it’s a team boat and because of the one-design rule it all comes down to skill to differentiate you from your competitor.

“If you are in sync, this class is immediately gratifying, there is nothing else quite like it. The one-design rule is closely managed so leading the fleet is all the feedback you need. Just look at the points, it’s ridiculous how close the racing is,” Bake concluded.

HOW THE SCORING WORKS

With the team owners at the helm, and the pros calling tactics, the fleet racing is very short, intense and action-packed, with a target race time of 40 minutes and boats frequently separated by just seconds at the finish line.

There are generally three to four fleet races a day, depending on weather conditions, and no discard meaning every single race counts. The fleet racing takes place on a windward-leeward course, with a dog leg at the windward mark and a gate at the leeward mark.

Points are allocated on the standard World Sailing ‘low point system’, so the boat that comes first in a race gets one point, second gets two points etc. The team with the fewest points at the end of each event is the winner.

The 44Cup also has the option to introduce a long distance race during a fleet racing series. These races are often two-to-three hours long, with teams sometimes given the challenge to circumnavigate nearby islands and landmarks.

The overall 44Cup champion each year is determined by adding together every team’s four best fleet racing scores from the five events, with the lowest score winning.

The first World Sailing-ratified 44Cup World Championship took place at Puerto Caleros, Lanzarote in October 2010 and was won by the combined force of Anders Myralf and Jimmy Spithill on ‘17’.

Points scored at the World Championship count as normal towards the final rankings but the overall winner of the event also walks away with the prestigious title of 44Cup World Champion title.