After a difficult second day of this regatta Slovenian Igor Lah's Team CEEREF was lowest scoring yesterday and today built on this, initially posting a second. They followed this in race two by a come-from-behind win as Torbjorn Tornqvist's Artemis Racing, for the first time at this event, led round the top mark. Team CEEREF split, gybing early into a beneficial shift and better pressure allowing her to cruise into the lead which she consolidated upon during the next upwind.

Thanks to this Team CEEREF started the final race holding a four point lead, but with Team Nika and Atom Tavatuy still capable of toppling her.

Sadly fortunes were not smiling on Chris Bake's Team Aqua initially today. After being able to do no wrong on Friday, when they scored a perfect three bullets, adding another yesterday, the wizened RC44 team left the dock leading by four points. However eighth and seventh to start with today not only lost them their lead, but dropped them from the podium. 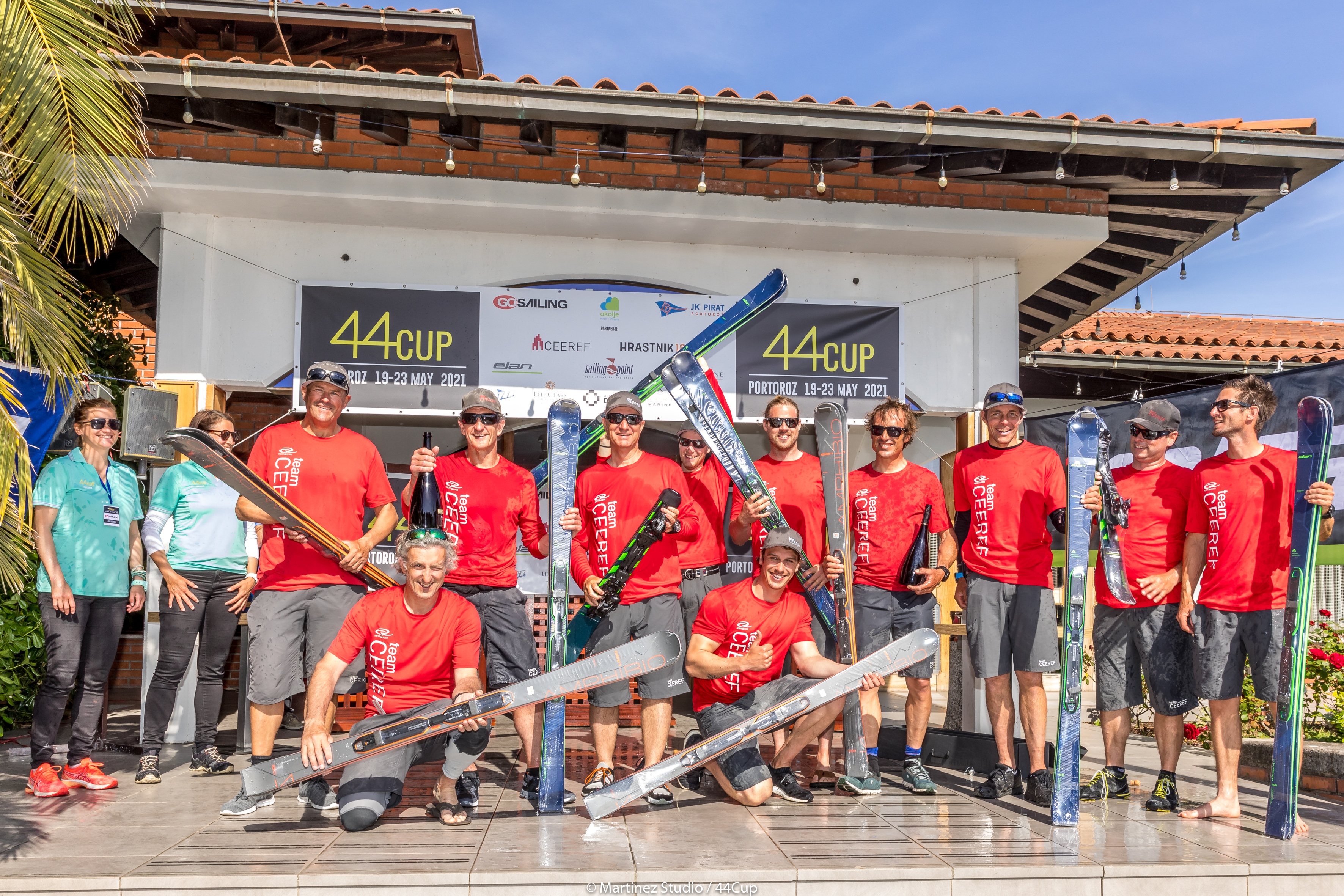 Fortunately in the final race Bake's team managed to get ahead of Atom Tavatuy to make a successful run on the bottom spot on the podium. This outcome was disappointing for Atom Tavatuy after a superb four days but their overall is the best result to date for Pavel Kuznetsov's team, the 44Cup's newest.

“It was very sad, losing third place on the final run like that,” said Kuznetsov. “We were expecting light wind this week there was a lot of wind and the racing was very close. I enjoy the fight.” Aside from eighth in the very first, race Atom Tavatuy otherwise finished no lower than fifth. Great things can be expected of her this season. Tactician Evgeny Neugodnikov added that they have benefitted from some new crew, boosting their “speed team”. “We have very good speed upwind, but we lost on the downwinds, especially on the gybes.”

Going from fifth to third place on the final run of the final race was enough for Team CEEREF to win the 44Cup Portoroz by five points from Vladimir Prosikhin’s Team Nika.

“It was brilliant - I am really happy for this event,” said Lah. “It is our first time to win in Slovenia and it is like winning a world championship for us. The team worked perfectly. We were able to keep all the guys together over the last 18 months - it was extremely important to keep the team spirit.”

Halfway through the regatta Team CEEREF was lying fifth. “We are always a little bit up and down - that is our speciality, I was not worried. I know we can do it, it was just a matter of time,” concluded Lah. This is the third season he has started out with the 44Cup winner’s ‘golden wheels’ but the first time he has kept them after the first event.

His tactician, Adrian Stead, added: “This week Igor drove brilliantly and Tine [Lah’s son] was fantastic on the boat handling and all the other guys. 44 racing is just so great and it is just about being consistent. In 2019 there were a couple of regattas where we’d have really good races and then we’d get a 7th or an 8th. One thing we did this was that we would try to turn a 7th into a 6th, etc. For sure we made some mistakes, but we have been consistent and kept fighting. The racing is awesome. The class is as strong as it has ever been and everyone has come back eager to race.”

Torbjörn Törnqvist’s Artemis Racing had her best day yet, twice leading at the top mark but was unable to hold on to her advantage. “There is nothing wrong with our speed - upwind we are quite fast,” observed Törnqvist, “it is the manoeuvring - that has to become better. It has been a fantastic regatta and the sailing conditions really couldn’t be better. It was challenging and great fun and hopefully we will learn from our mistakes. Even though today the last race was terrible - getting the mainsheet caught around the wheel at a critical moment, I am not unhappy. I enjoy being here and doing the regatta is most important.”

The final race of the day was won by Hugues Lepic’s Aleph Racing. “It is great to be back and this event was really fantastic with the quality of the wind and the racing,” said Lepic. “Until the last race it wasn’t clear who would be on the podium. That last race was a classic, very exciting and that is what we all like about this class.”

His tactician Michele Ivaldi added: “It was a fantastic four days. It was unexpected, but very welcome and I think all the owners had a fantastic time with flat water and shifty breeze, the racing was always open. These boats are always fantastic in 15-22 knots, so I think everyone enjoyed it greatly despite the results.”

Due to the pandemic, the 44Cup Portoroz was the first event for the high performance owner-driver one designs in 17 months. It took place with strict safety measures put in place by the RC44 class and the local organisers, including event and team bubbling and frequent testing for COVID-19. Bertrand Favre, RC44 Class Manager said: "I'd like to thank our tightly knit group of RC44 owners whose pushed for this event to take place."

The 44Cup Portoroz was one of the first fully international yacht races to take place in the Mediterreanean since the pandemic struck. "I'd also like to thank the local organiser Mitja Margon and his team at GoSailing, plus the sponsors of the 44Cup Portoroz for making this event possible," said Favre.