Team Aqua win 44Cup Cascais with a race to spare

Whether it is in big waves or small, gale force or sub-10 winds, Chris Bake’s Team Aqua has shone this week and as a result today won the 44Cup Cascais with a race to spare. Although this was common occurrence for Team Aqua during her glory years of 2011-13, winning with a race to spare is very rare these days, such is the level of competition in the high performance one design monohull class.

The final day of 44Cup racing off the Portuguese sailing mecca, where the event is being hosted by the Clube Naval de Cascais, provided even brisker conditions than yesterday. This was mainly due to the race committee setting up the start area further offshore, free from the protection of the headlands west of Cascais. As a result, with the wind regularly blowing 20+ knots, and a lumpy and at times random chop set up on top of the Atlantic swell, it was a perpetually wet ride for the crews on this high load, high stress deciding day. 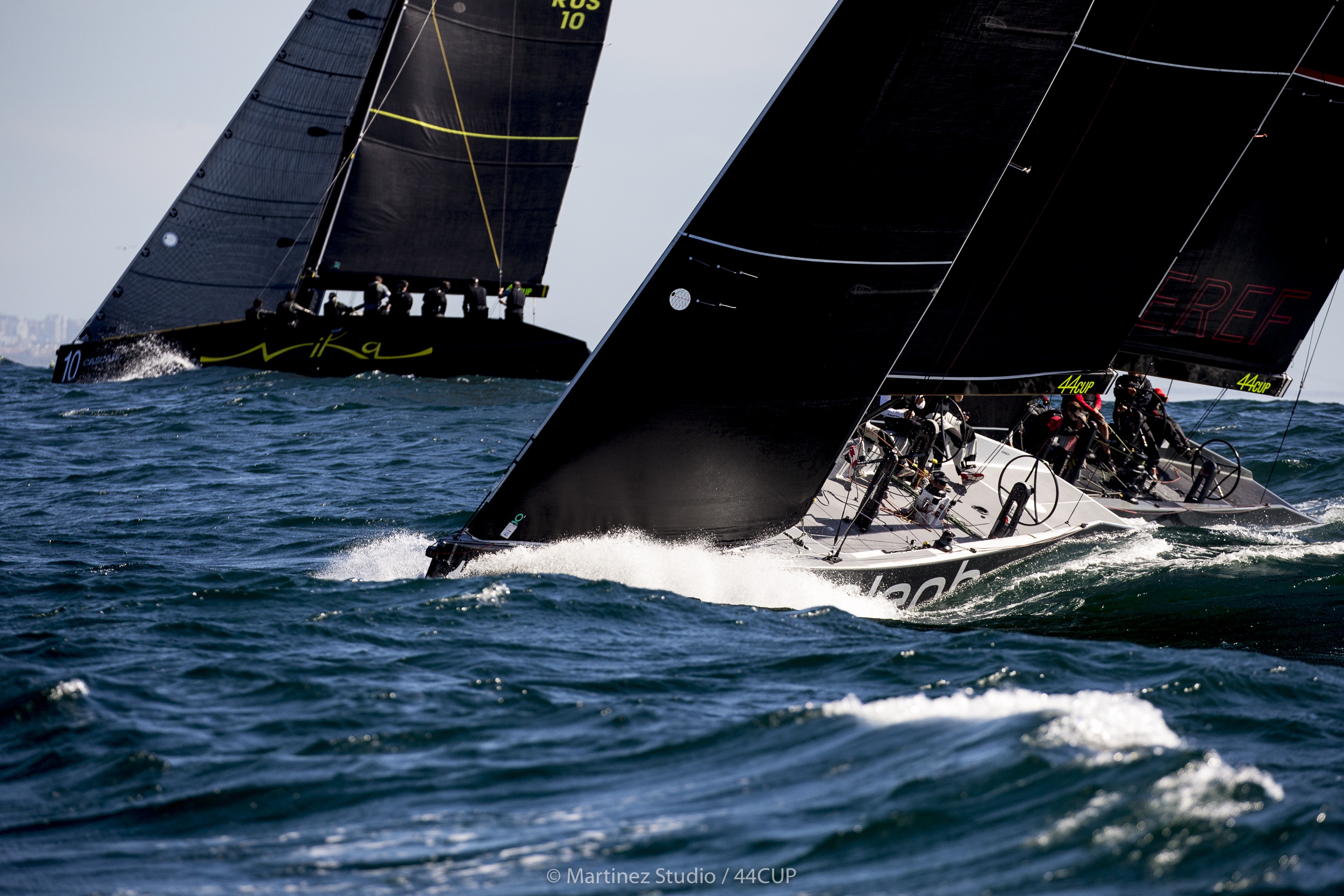 A 4-3 today was enough to seal the deal for Team Aqua, already holder of the 44Cup’s golden wheels (indicating they currently top the leaderboard) and arriving in Cascais having been crowned RC44 World Champions in Marstrand in July.

Chris Bake described his victorious day: “We had phenomenal conditions and the boat was well set-up and we seemed to be well locked in and that played to our favour. With the wind in the last race we considered sitting it out, but instead we decided to sail it conservatively and have fun on the downwinds. Overall it’s been a phenomenal regatta, the boat is going great, the team is dialled in and we are feeling really good.”

Vladimir Prosikhin’s team, on which America’s Cup and SailGP winner Tom Slingsby calls tactics, had a spectacular end to the 44Cup Cascais winning both today’s first and last race, the latter by almost half a leg. A last place finish in today’s opening race, followed by a seventh for Nico Poons’ Charisma caused the Monaco-based Dutchman’s team to be displaced from second place overall by Team Nika, but ultimately they held on to the third step of the podium, three points behind.

“It’s becoming a pattern that we need one more day - we wake up too late,” admitted Vladimir Prosikhin. “It was a pity we didn’t win the second race today - it would have been much better to have had four firsts in a row. But we improved our position, so I am happy.”

After a strong start to the 44Cup Cascais, Nico Poons' Charisma did well but couldn't shine as brightly as the teams on the ascent in the last two days. However with a scoreline this season of 9-2-9 followed by a third today in Cascais, the Monaco-based Dutchman's team is replicating his up and down season of 2018...which he ended up winning overall.

Also coming good for the final day of competition was Igor Lah’s Team CEEREF. Winner of the 44Cup Montenegro at the beginning of the year, the Slovenian team had a lacklustre start this week in Cascais but fought back in style today. They were leading in the first race until their kite ripped neatly in two from luff to leech at the start of the first run. However they turned this around in today’s second race by scoring their first bullet and fighting back to finish third in the final race - a fitting result considering: “It is my birthday - so that is why. I should have one each day!” quipped Lah. “We just sailed the way we know how to sail, only three days too late. We are happy we can still win.”

According to Team CEEREF’s British tactician Adrian Stead they had pressed the reset button after scoring deep results on the first two days. Today certainly they were showing the boat speed and tactical skills that won them back-to-back 44Cup season wins in 2016 and 2017. “Today with the breeze being quite far right we felt there were opportunities going up the middle,” said Stead. “It was shifting around and there were enough shifts and gusts that we picked our time to go out on port.”

The ‘oceanic’ conditions were tough on the salt water drenched crews and owner-drivers but was also exhilarating for them as the RC44s surfed down waves at 20+ knot speeds. Vladimir Prosikhin described it: “When the boat is in the groove and going faster than 20 knots for the whole run, it is like flying - a fantastic feeling.”

Other teams lacked consistency today, but most showed glimpses of brilliance - Torbjörn Törnqvist's Artemis Racing coming home second in today's first race and Peninsula Petroleum fourth in the final race, but generally not looking comfortable in the 'big conditions'.

Team Aqua may be World Champion and current hold the 44Cup leader’s golden wheels, but Team Nika is just a point behind her overall in the 2019 44Cup. All will be decided at the final event of the season in Palma over 13-17 November.