At the halfway stage of the 44Cup Cascais, Chris Bake’s Team Aqua has joined Nico Poons’ Charisma at the top of the leaderboard and is even ahead on countback.

The second day of racing for the high performance one design RC44 monohulls, hosted by the Clube Naval de Cascais, was held in slightly more wind than yesterday, 10-16 knots, building slowly in the final race, but remaining more firmly northwest. However the height of the swell was notably larger, drummed up by Hurricane Lorenzo. Thanks to the long wavelength this wasn’t especially dramatic, but it made holding a course tricky as boats experiencing a momentary lull as they disappeared in the troughs.

In the first race Hugues Lepic’s Aleph Racing nosed ahead after claiming the inside overlap on Torbjörn Törnqvist’s Artemis Racing rounding the top mark. From here the French team went on to win the first race, just as they did yesterday, en route to becoming top scorer of the day.

In the next race Team Nika attempted to pull off a similar manoeuvre on the inside at the top mark, but was just too slow. Team Aqua sailed around their outside and on to claim their second bullet of the regatta. 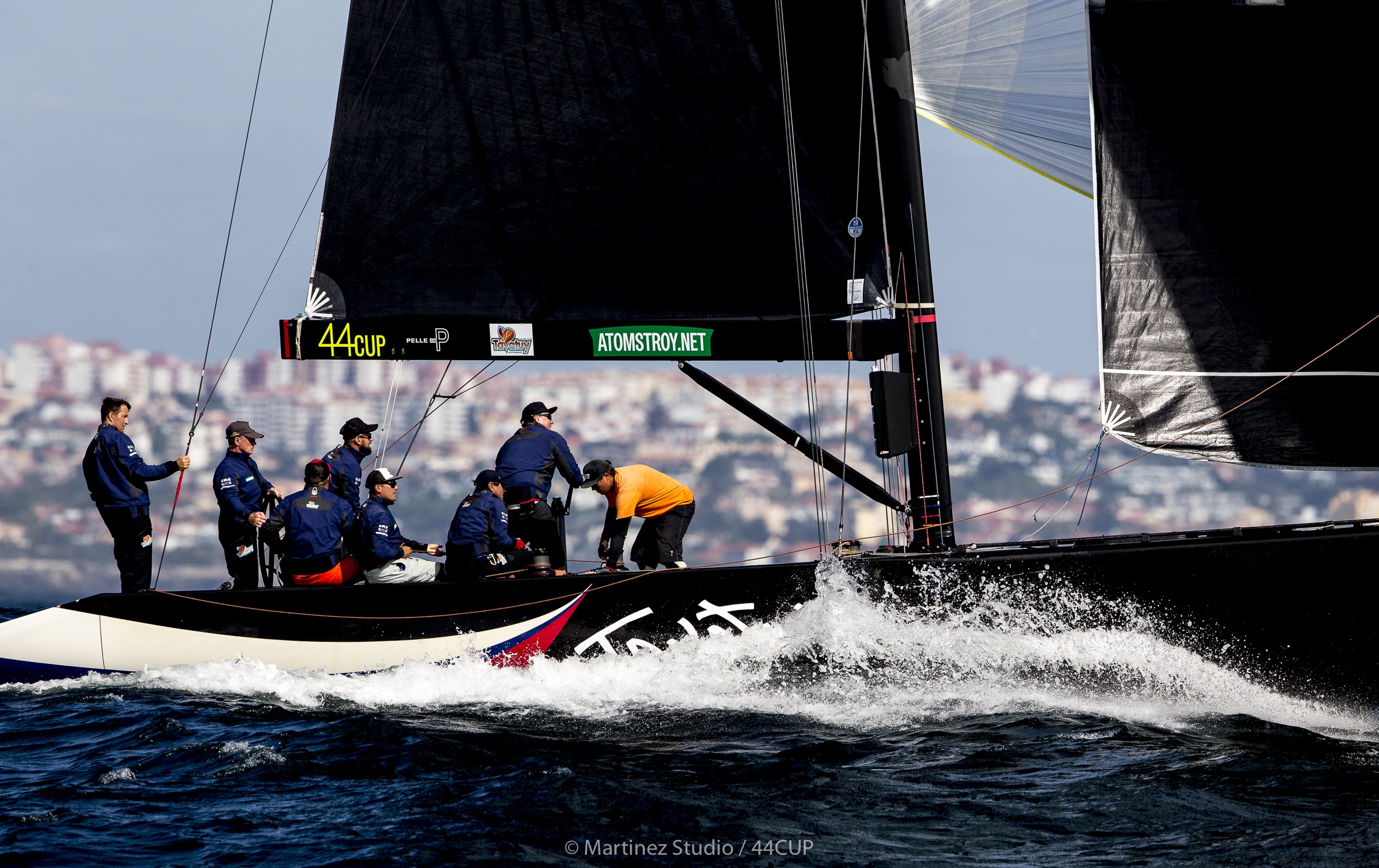 “As we know, the class is really competitive,” said Chris Bake of their performance so far. “Our boat set-up is good, crew-work is going well, the conditions are challenging but we seem to have found decent boat speed - that and some good starts have put us in a decent position. It is not over - we are just trying to be relaxed. We go out there and do what we think we know how to do, and keep it smooth while trying to keep the boat moving.”

Of sailing in today’s swell, Bake said it had been challenging as they had to keep the boat going in the troughs. It was also vital to carry out manoeuvres in space, because “if you got squeezed at the top it was quite difficult to recover...”

The most dramatic change of fortune occurred in today’s third and final race. After the first two races, snagging a fishing pot in the first (and having to back down to release it) and also finishing last in the second, the left finally came good for 44Cup newbies, Pavel Kuznetsov’s Tavatuy Sailing Team.

“Before the third race our coach said that the left was paying all the time,” explained tactician Evgeny Neugodnikov. “We saw how Aqua had won the last race from the pin and we just did the same! We just stayed on our line, kept a good distance above the boat to leeward of us and just went fast and straight. We were also on time, in the right place, with good speed.”

Returning on port, the team from central Russia crossed ahead of the starboard tackers to lead around the windward mark. Those astern of second placed Team Aqua were held up by Bronenosec Sailing Team, which had parked up coming into the mark. Meanwhile Tavatuy Sailing Team sped to victory.

“We set ourselves the goal of being in the middle today!” mused Kuznetsov later. “At the moment we are up and down and it is difficult to understand where we are. Each day seems to be a new fight. Today the waves were beautiful - I loved it!” But the swell had forced even the towering Neugodnikov to stand up on the final leg to see the finish.

Vladimir Prosikhin’s Team Nika seemed to have a better day posting a 2-3 in the final two races, and holds fourth, nine points behind Aleph Racing. In fact their day’s score was just one better than yesterday due to their eighth in today’s opening race. “The important thing is that we were second and third in the second and third races and have found our groove,” said Prosikhin. “The feeling is completely different, because before we struggled to find a nice mode - we were sailing too slow and were losing speed which was very difficult to recover. Now we are sailing more like the other boats and it is more equal. I hope it will continue, otherwise it will be quite painful!”

Prosikhin said the tricky part was remembering how to sail the boat in a sizeable swell. “Upwind – the wind speed is different in the troughs and the crests. The boat naturally goes up and down but when you have speed and a bit more wind it’s easier. Somehow it has taken us a while to remember how to sail in this.”

While Team Nika holds the middle ground, the leaderboard at this halfway stage looks very unusual for the 44Cup with three boats within two points of first and, almost 20 points behind, four boats two points off fifth. Over the remaining two days it will be interesting to see if this division contracts or expands further. 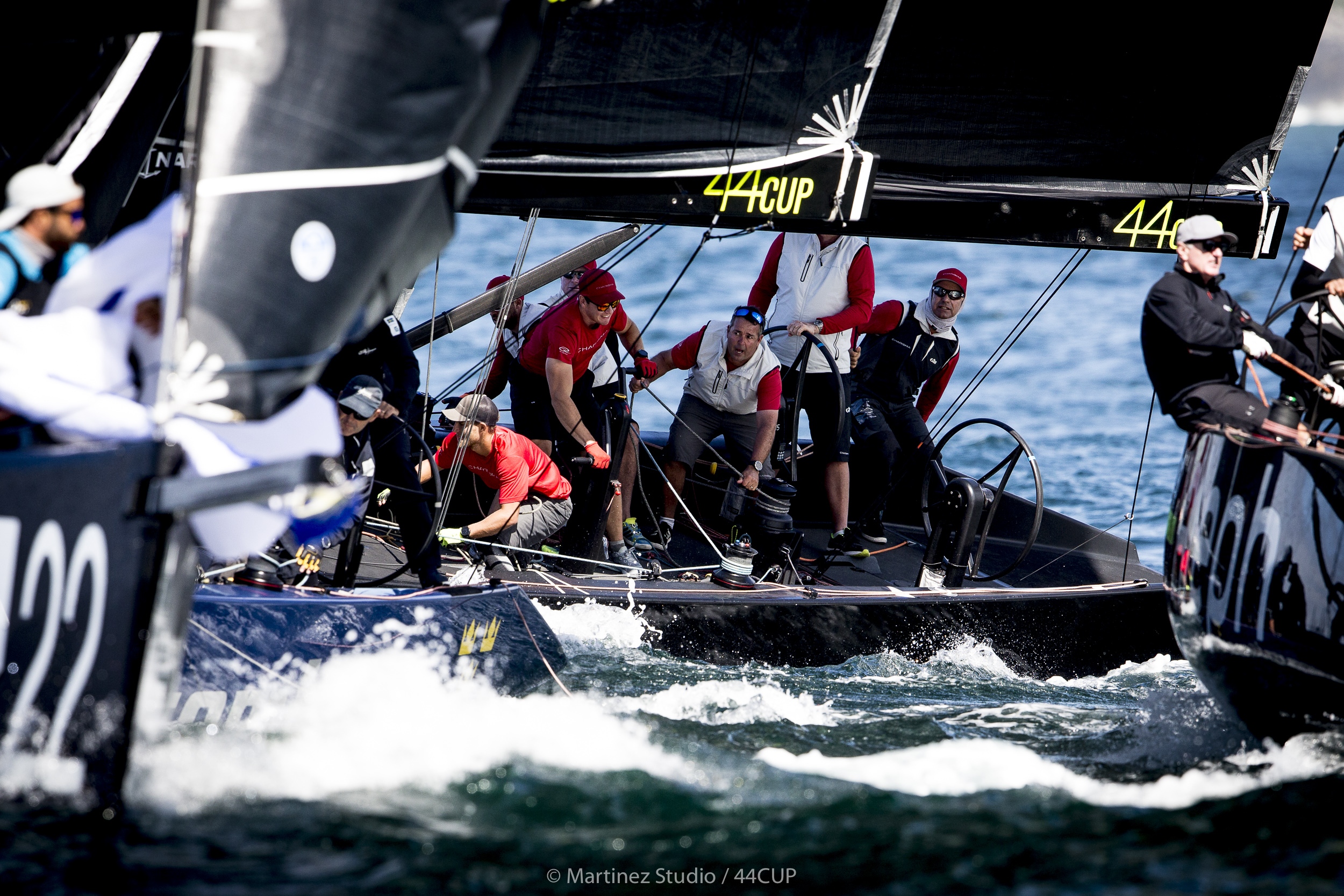