How things can change. After two light days but with a comparatively large Atlantic swell running, an aggressive-looking cold front off the Portugese coast looked set to make racing impossible on the penultimate day of the RC44 Cascais Cup. However while the skies were overcast and an evil, boat slapping confused sea was running, and the wind built into the mid-20s off Marina de Cascais, it still proved very sailable for the one designs and their owner-driver helmsmen.

The dramatically different conditions also saw some teams come to the fore today, perhaps better suited to the severe conditions, none more so than Nico Poons' Charisma. The Monaco-based Dutchman had won yesterday's final race and continued his winning streak today to claim bullets in both of the two races held. In comparison yesterday's runaway leader, Vladimir Prosikhin's Team Nika, had a day they'd rather forget, posting a disappointing 6-8, the latter following some leeward gate spinnaker trawling. The end result going into the final day of the RC44 Cascais Cup, and of the 2018 season, is that Charisma has streaked into the lead, three points ahead of Chris Bake's Team Aqua.

"We won two races out of two - it was very good for us," said a delighted Poons. "It was a bit of a workout. It was not only the wind, but also the sea state, so two races was okay. Above 22-23 knots it was more about survival than racing."

"We had a fantastic day today," agreed Charisma's tactician and Emirates Team New Zealandlegend, Ray Davies. "We had two good starts, especially the second, when we owned the pin where there was 10° bias. That set us up. The guys just sailed really well. It was tough conditions with big waves from different angles." 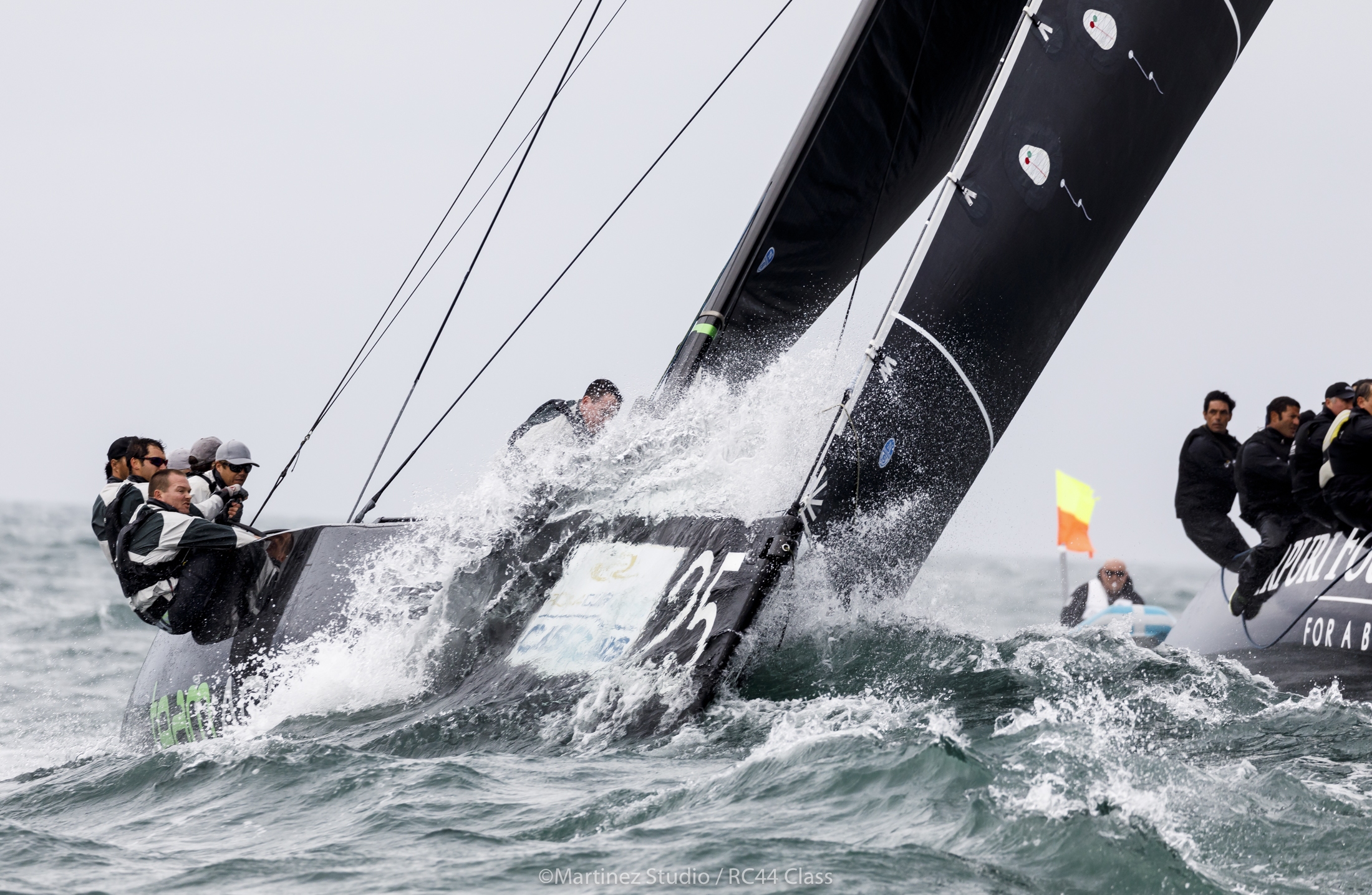 Given the sea state and the wind peaking at 27 knots, today's conditions were more Volvo Ocean Race, an event Davies won with illbruck Challenge in 2002 alongside fellow Charisma mainsheet trimmer and birthday boy Ross Halcrow. "We do like the breeze," admitted Davies. "It keeps it exciting and it keeps Nico focussed - he did a great job. It was all about surviving the downwinds today. We had one broach but a very small one and we were able to drop the spinnaker at the bottom mark."

Meanwhile Davies was feeling for his former helm, Dean Barker, tactician on Team Nika which plummeted from clear first to fourth place at the end of play today, now five points off the lead and watching the 2018 RC44 Championship slip through their fingers. "Dean had a tough day. But we had that on the first day," said Davies.

Late for class, Chris Bake only took back command of the helm of his Team Aqua today. "The swell was bizarre – I wasn't used to it, so I came out and broached about three times…" Bake admitted. However in today's conditions his experience and that of his team showed and a 5-3 today was enough for them to hold second place, albeit now tied with reigning RC44 championship Igor Lah's Team CEEREF. "The team was fully on point and sailing well but it was hard work," continued Bake. "I had surgery on Wednesday - I've got nine stitches in my back…"

Also slowly turning around their fate today after a difficult start to the regatta was Kirill Frolov and Bronenosec Sailing Team, which posted a 3-4 today, elevating them from seventh to sixth. This was thanks to two great recoveries following some heinous starts, said Frolov, including being called OCS in the first race. "It was great. We've been waiting for these conditions, because yesterday it was terrible. We prefer bigger wind and with powerful sails, I feel better. Our starts were terrible, but downwind was great, even if we had one broach. These were our conditions."

For the last day of the RC44 Cascais Cup tomorrow the wind is forecast to drop but a giant seastate is forecast to form as the front closes on the coast here tonight. "The wind is down but the sea state will be ridiculously big," forecast Ray Davies of tomorrow's conditions. "It is supposed to 6m and breaking over the sea wall."