Portugal’s sailing mecca, for the opening day of the RC44 Cascais Cup. After a two hour delay, a light westerly established itself in the mouth of the Tagus Estuary, building to 15 knots by the end of the afternoon, enabling three races to be held.

Competition out on the water today proved that it is no aberration that just two points separate the top five boats in the overall 2017 RC44 Championship. After day one the RC44 Cascais Cup leaderboard is similarly tight with just five points separating the top seven boats. Not only were there three different winners, but in each case the winner was not the leader at the first top mark rounding. 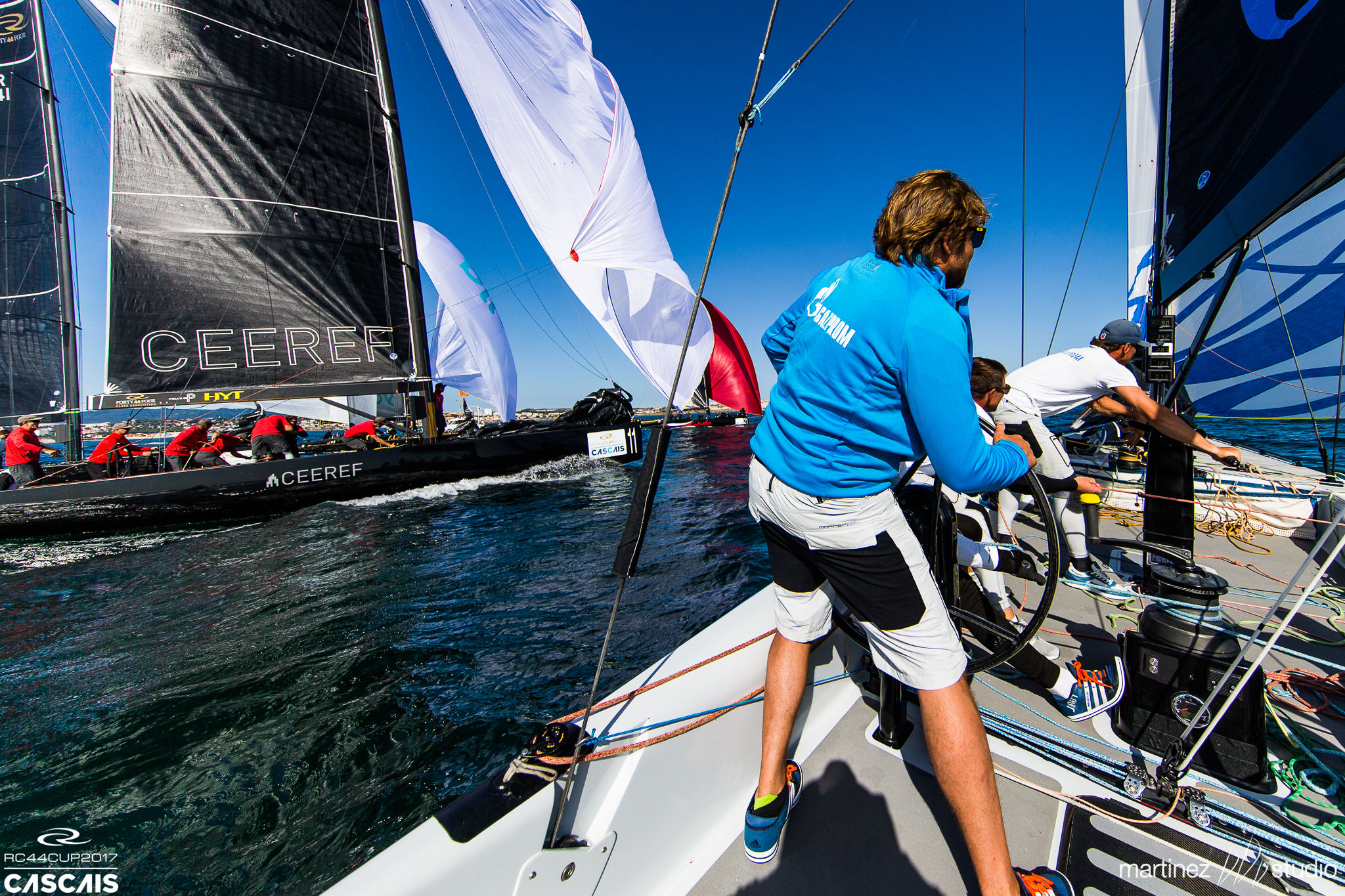 Alexander Novoselov’s Katusha, on which America’s Cup winning helmsman Ed Baird is standing in here for Andy Horton on tactics, claimed the opening race. Chris Bake on Team Aqua slipped around the top mark holding a narrow lead, but the Russian RC44 subsequently rolled them on the first run.

“We had quite a long fight with Aqua which we managed to win - quite often we win the first race,” said Novoselov. However the Russian team was then scored OCS - twice. “We plummeted after that! If this was hockey they would have substituted us! In the second race we recovered well, It was a very good race, but in the last one we couldn’t do it.” Katusha now lies fourth overall.

The story was similar in the second race when the Gustaf Lidvall-skippered Artemis Youth, on which Artemis Racing America’s Cup skipper Nathan Outteridge is calling tactics, managed to sneak inside John Bassadone’s Peninsula Petroleum to lead at the top mark. Bassadone was able to roll past the Swedish team on the run and despite strong challenges from Nico Poons’ Charisma and Kirill Frolov at the helm of Bronenosec Sailing Team, managed to defend their position successfully to the finish.

“We had a good race, stayed out of trouble, kept good boat speed and made no real errors which wasn’t the case in the other races,” said John Bassadone. “We are still licking our wounds from the World Championship – that was a bit of a challenging one.” In Marstand last month they finished a disappointing seventh. 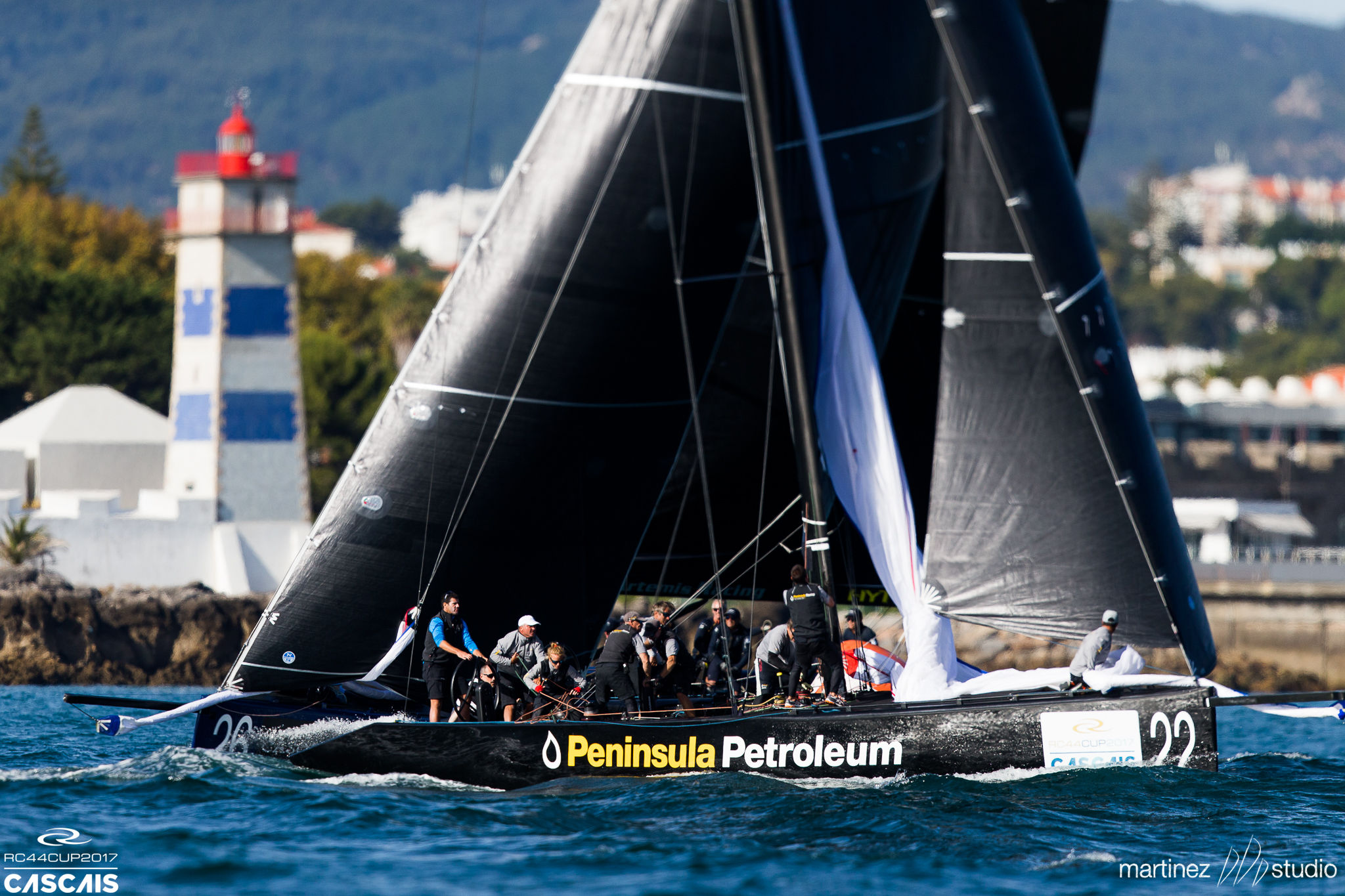 His tactician Vasco Vascotto added: “We made mistakes, but others did too and it was quite nice because even if you have to go right [the favoured side of the course here in Cascais], sometimes the left pays a little bit. Also downwind usually you had to do a quick gybe set and often it didn’t work properly. So I think the results show this up and down.”

In today’s third and final race, it was the turn of Vladimir Prosikhin, tactician Terry Hutchinson and the crew of Team Nika to lead at the top mark. They managed to hang on for longer and it was only through Igor Lah’s Team CEEREF heading out to the extreme right on the second beat, then tacking back in and applying their starboard advantage that they overtook Prosikhin’s RC44 World Champions with some difficulty.

“We sailed really well today especially the last race,” said Lah. “It was a little reminder of our match racing days – we had a fight with Team Nika on the second beat and came together three or four times before finally we could get across. The start of the second race was really scary because everyone wanted the same spot and honestly I didn’t know what was going to happen.”
While these were the success stories, all of the frontrunners also scored deep results today. This was not due to conditions being difficult, but due to the ultra-competitive nature of the RC44 fleet at this stage of the season. There were Katusha’s OCSes, while Team Nika would be holding second overall had their transom not collided with and damaged Nico Poons’ Charisma at the start of race two, resulting in a two point penalty.

Even Team CEEREF had a bad second race, as tactician Adrian Stead explained: “Our mistake was going with the genoa when the rest of the fleet had jibs. It was fine in a straight line, but hard work at the start for line-ups, sailing against people who could manoeuvre better with jibs.” In that race they posted a seventh.

Racing continues tomorrow with three races and a first warning signal at 1200.