While conditions seemed similar to yesterday with a light northwesterly, results on day three of the Adris 44Cup Rovinj demonstrated how fortunes between the slippery, high performance RC44 one design monohulls and their ultra-competitive crews can change in a heartbeat.

London-based Frenchman Hugues Lepic's Aleph Racing was top scorer in yesterday's three races, just. But today, the bit between her teeth, she was runaway leader.

In race one Torbjörn Törnqvist's Artemis Racing, this week helmed by Sarah Gunderson, was a nose in front at the windward mark, but on the first run Aleph Racing benefitted from hanging on to starboard longer and by the leeward gate were in front. They maintained their position while Artemis Racing's second propelled her in to the lead overall as Team CEEREF's fortunes plummeted, coming home eighth.

Aleph Racing proved this was no fluke when in the second race they started well and made the most of the left this time taking the lead on the first beat. Once again they clung on, scoring their second bullet. 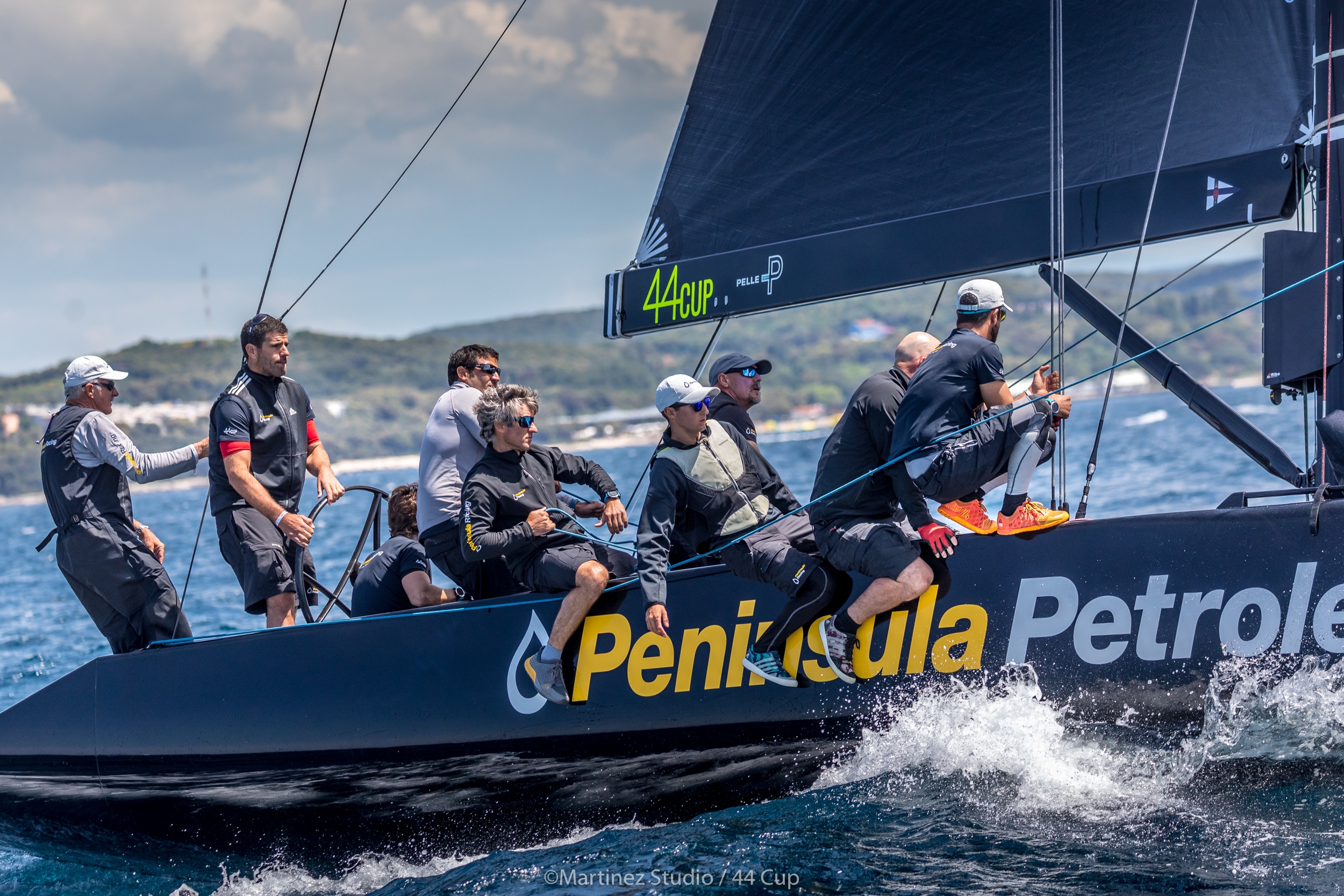 A couple of false starts and a temporary change in the wind situation caused a delay before the third race was sent off successfully. In this Aleph Racing again was strong up the first beat until John Bassadone's Peninsula Petroleum nosed ahead, coming in from the right on the first beat. As the breeze got progressively lighter, the Gibraltar team extended away in clear air to claim its first bullet of the series.

"Conditions have been pretty tough, but we just kept on fighting, fighting, every single moment, and managed to get some reward for it," explained Bassadone. "Yesterday we didn't sail badly, we just had some tough conditions, very tricky to read the shifts."

Bassadone praised his new tactician for this season, Ed Baird. "Today's second and the first were enjoyable, but even the first race too – at one point we were in trouble and Ed got us back to a very good fifth. It is stressful racing, but fantastic, a fantastic place, and it is all very close." He was also pleased for Hugues Lepic and Aleph Racing knowing the excitement of winning here (Peninsula Petroleum claimed the RC44 World Championship in Rovinj in 2012).

Of the third race, Baird said: "We didn't have the best start, but we escaped into a clear air. The wind had dropped and it had shifted back and forth 40°, so it was hard to know what was coming next. We just tried to stay clear and when it felt like a good time to go back, we did, and it proved better than expected."

Today wind shifts were subtle and perhaps Baird's credentials as a former Laser World Champion paid. "The shifts weren't registering on the wind indicator so it was just feeling in the boat," he said. "It seemed like we had a lot of breeze at the top of the mast, but just five on the sails. It was very hard to read."

Yesterday's leader, Team CEEREF was having a tougher time, yet still dug herself out of deep positions: A 3-4 in the final races have left her second overall.

Going into the last day of Adris 44Cup Rovinj Aleph Racing holds a five point lead over Team CEEREF. Significantly this is the first time the French team has ever led, or been in line to win, a 44Cup event.

Ashore at the VIP entertainment area within the Grand Park Hotel Rovinj, Hugues Lepic was jubilant, but not yet overly confident: "I take each race at a time. We'll see what happens tomorrow. I hope for a good performance, but the racing is very competitive, everyone is good, everyone can win, but everyone can make mistakes too.

"The team is excellent – Michele [Ivaldi - tactician] is doing a fantastic job. Everybody's gelling together really well and today we had some fantastic starts. Obviously when you are ahead it is much easier to stay ahead rather than battling in the background. We were very focussed and it was great to see how it works when everything goes well."

Ivaldi also reckons it was the best day of his long 44Cup career. "My wife suggested that I eat the same breakfast as I had yesterday! You don't often come home after three races with just five points."

Aleph Racing seemed to do well being opportunistic. In the first race for example they had wanted to go right earlier but saw more pressure on the left further up the course, so decided to persevere.

Aleph Racing's five point lead is still beatable, but the fight is closer behind with Artemis Racing, Peninsula Petroleum and Charisma all within three points of second placed Team CEEREF.

Another tight race is going on lower down the leaderboard were Team Aqua, Team Nika and Bronenosec Sailing Team are all within two points.

To make up the schedule and because the forecast indicates conditions may be lighter, racing has been rescheduled to start an hour earlier tomorrow. Meanwhile tonight the celebrations continue for the opening of Maistra's Grand Park Hotel Rovinj and the adjacent ACI Marinas Rovinj superyacht marina.