Five races within one on opening day

A difficult opening day of the Adris 44Cup Rovinj saw just one race completed and a worthy winner in Igor Lah’s Team CEEREF. But perhaps never in the history of the 44Cup have so many different teams led during one race.

After a southeasterly had developed enough to cause the fleet to be called out of their berths in ACI Marina Rovinj, the wind died, but the race officials spotted an area of northerly breeze up 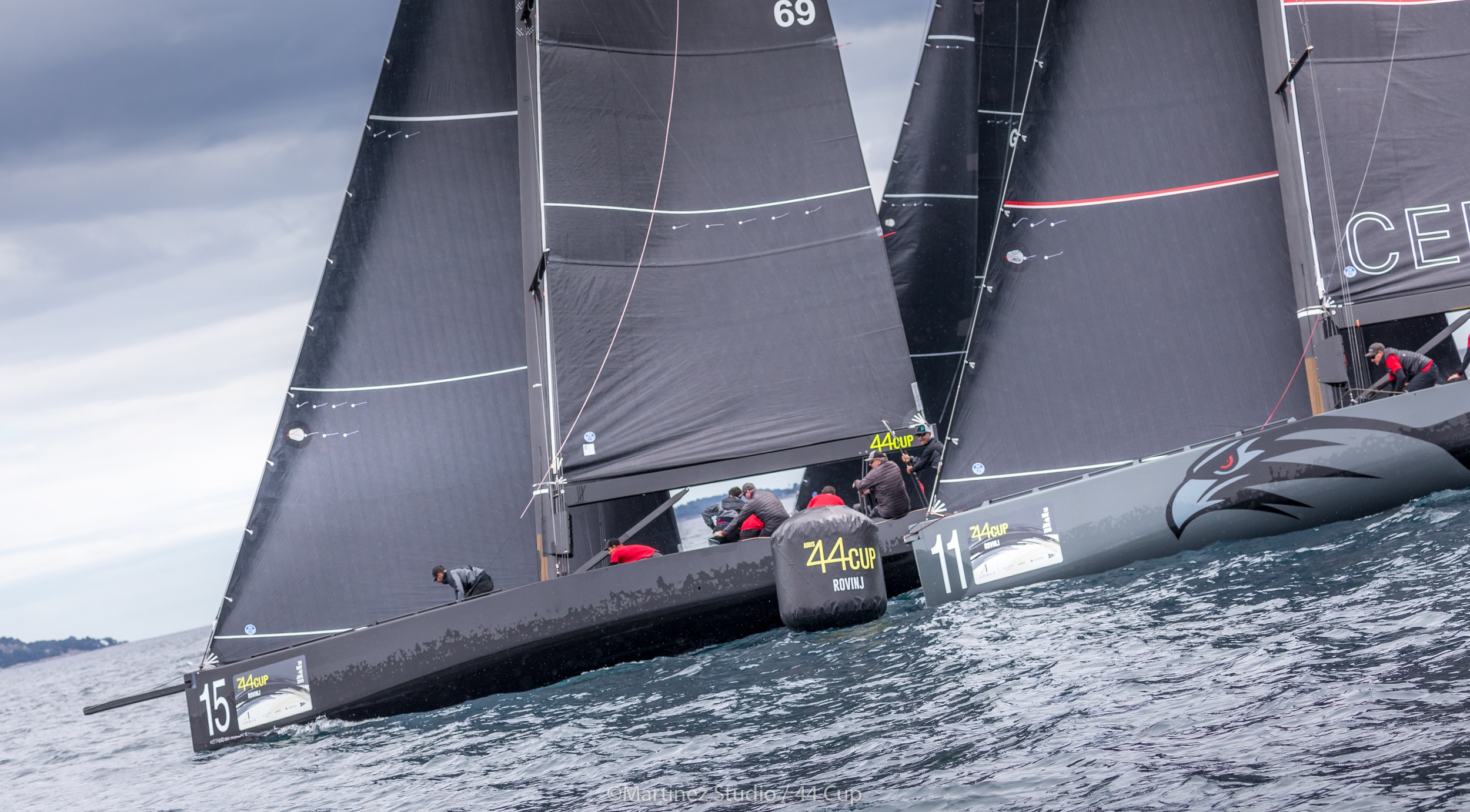 Up the first beat the 44Cup’s most recent team, Pavel Kuznetsov’s Tavatuy Sailing Team was looking good having won the pin and committed to the left as Nico Poons’ Charisma with new tactician John Kostecki, had made the best in the middle having been late on to port tack. Approaching the top mark on a header everyone had failed to lay and, neck and neck leading in, Charisma and Igor Lah’s Team CEEREF put in two tacks and a bear away so close that it was like they were joined at the hip. But this slowed them down to such as degree that Kirill Frolov at the helm of Bronenosec Sailing Team was able to come in at speed and slingshot into a gybe, rolling the lead duo.

Down the run Vladimir Prosikhin’s Team Nika followed Bronenosec in making an early gybe but then changed sides of the course and thanks to this was able to sneak ahead of Bronenosec and lead into the leeward gate ahead of Team CEEREF. But it was a strange leg as Team CEEREF tactician Adrian Stead later observed: “Some boats seemed to have a 16 knot header and some didn’t! But it meant that everyone went around the gate within about 30 seconds.”

Up the second beat a right shift evened up the field yet again but the lead trio of Teams Nika and CEEREF and then Bronenosec remained unchanged. However down the last run, hanging on port gybe the longest of the three leaders, taking them all the way to the starboard layline where they found a little more pressure, followed by an immaculate gybe, caused the Team CEEREF to take first place.

“It was a funny race,” recounted Igor Lah. “We went from first to last and back to first, but the important thing is to be first across the finish line. I was completely exhausted because I was so nervous all of the time as we were trying to gain every centimetre.”

Adrian Stead observed; “It was a day about being very reactive to every bit of wind you had. On the downwind when it was our gust, it felt like if you could stay in it longest you could make the biggest gain.”

Behind there was a photo finish for second that went the way of Vladimir Prosikhin’s Team Nika ahead of Bronenosec Sailing Team. However Kirill Frolov was satisfied with his race. “At the first weather mark rounding we did a fast early gybe and we got a nice gust that put us into first place. The second downwind was very nice too, but Team CEEREF did better, about 150m further down on the right side.”

There was an even better photo finish between the final five with Torbjörn Törnqvist’s Artemis Racing and Peninsula Petroleum coming out on top.

Sadly the wind then began to misbehave and after contemplating setting up a course in a new southeasterly wind, PRO Peter Reggio thought better of it and wisely sent everyone home. Of the wind today he commented: “There are 360 degrees in the compass and we hit 387 of them! I don’t like to chase breeze, but today you had to. We got really lucky with that one race because when they finished the sun came out and killed everything.”

Tomorrow racing is scheduled to start once again at 1200.