Come from behind victory for Team Aqua

It all came down to the final top mark rounding of the final race at the RC44 Portorož Cup: Team CEEREF of local host Igor Lah picked up a penalty and completing a mandatory turn dropped her to last place. Remarkably, considering that they came last in today’s first two races, Team Aqua’s second place in the last race allowed Chris Bake’s crew to clinch victory overall, just one point ahead of Team CEEREF. In fact the top four boats at this Slovenian stop of the 2018 RC44 circuit all finished within  two points, with Aleph Racing and Peninsula Petroleum putting in strong final performances, leaving them tied on points in third and fourth respectively.

“It was planned to the end, executed with perfection!” said a grinning Chris Bake, after he emerged from the waters of Marina Portorož after his traditional victor’s dunking, adding more truthfully: “Unbelievable. It was fairly last minute! After the second race we thought we’d blown it - we were sailing the boat well but just couldn’t get in the right position. It was pretty tight. It is good to know that we can still do it from time to time, because it is getting tough.” 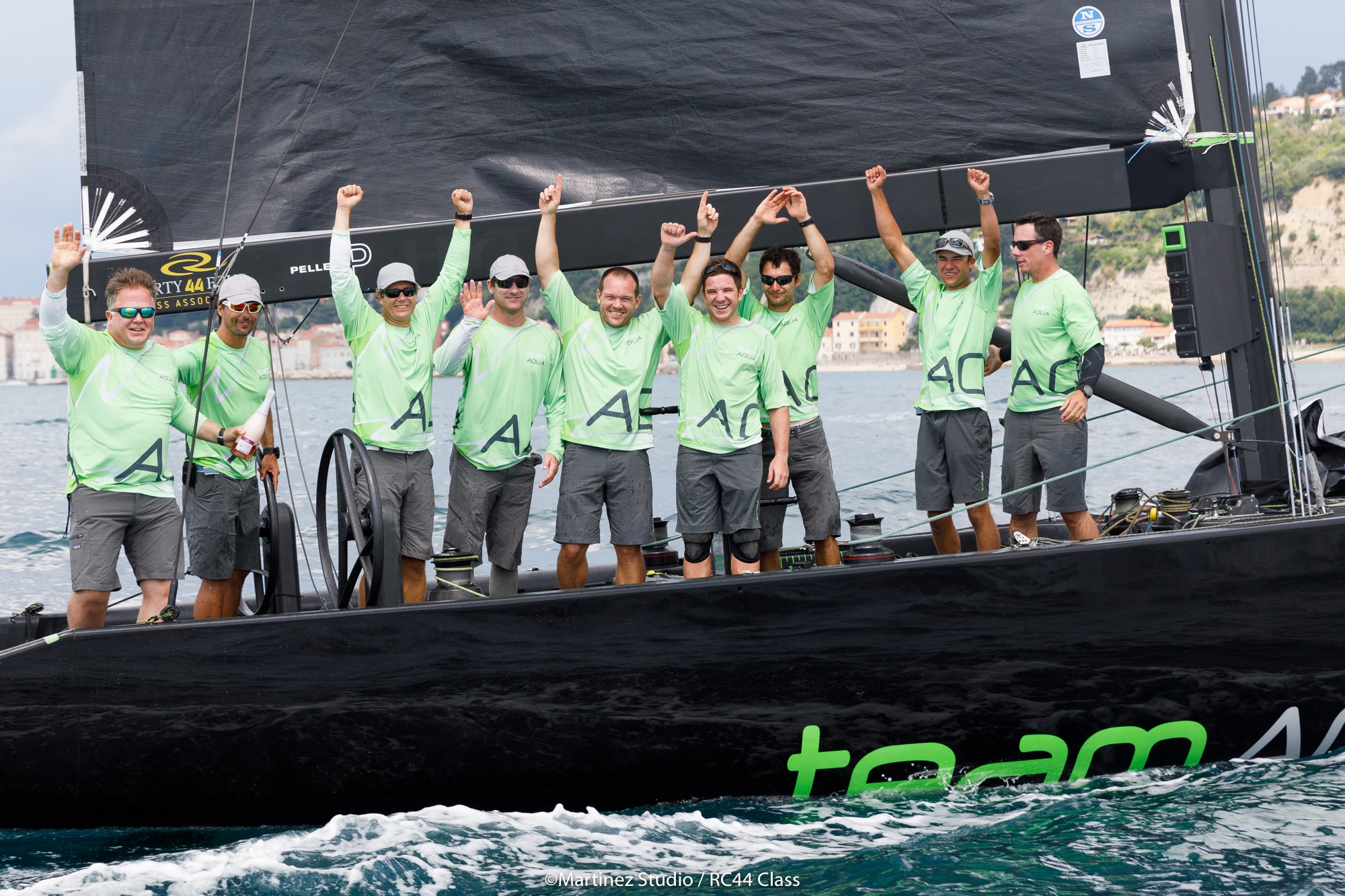 His tactician Cameron Appleton added: “I am proud of what we accomplished this week. We set ourselves some goals and worked hard. We sailed brilliantly but in race two I had an absolute shocker trying to keep guys behind me instead of looking ahead and I got out of phase. But we kept cool and stuck to our process and the results took care of themselves after that.”

Teams Aqua and CEEREF had started the day tied on points. Lah’s team had edged one point ahead after race one and had four between her and Team Aqua, with John Bassadone’s Peninsula Petroleum sandwiched in between going into the last race. At this point Team CEEREF was in good shape. Tactician Adrian Stead explained: “We did have a target on our back today. In the last race we went around the gate in fifth and played a couple of shifts, but didn’t quite convert at the top.  We got headed and tried to tack on to port but we couldn’t quite get behind Nika and we got a flag for it, which was fair enough. But the race remained alive all the way to the finish.”

“It was one point, but a crucial point,” observed Igor Lah wryly. “It was unfortunate, but that is how it is. The event has been great with nice sailing. I’ve really enjoyed it. Of course I wanted to win on home waters and that didn’t work, but we have the World Championship ahead of us and the season. We will have to come back to put this right next year!”

Piran Bay laid on similarly light, bright, flat water conditions and an onshore breeze on this concluding day of the RC44 Portorož Cup, but with the wind out of the southwest.

Torbjörn Törnqvist’s Artemis Racing winning the opening race, meant all of the RC44 teams competing here have won races - proving once again how competitive is this Russell Coutts-inspired high performance one design circuit. In this race Nico Poons’ Charisma and John Bassadone’s Peninsula Petroleum were OCS, but both fought admirably to pull off second and third place finishes. 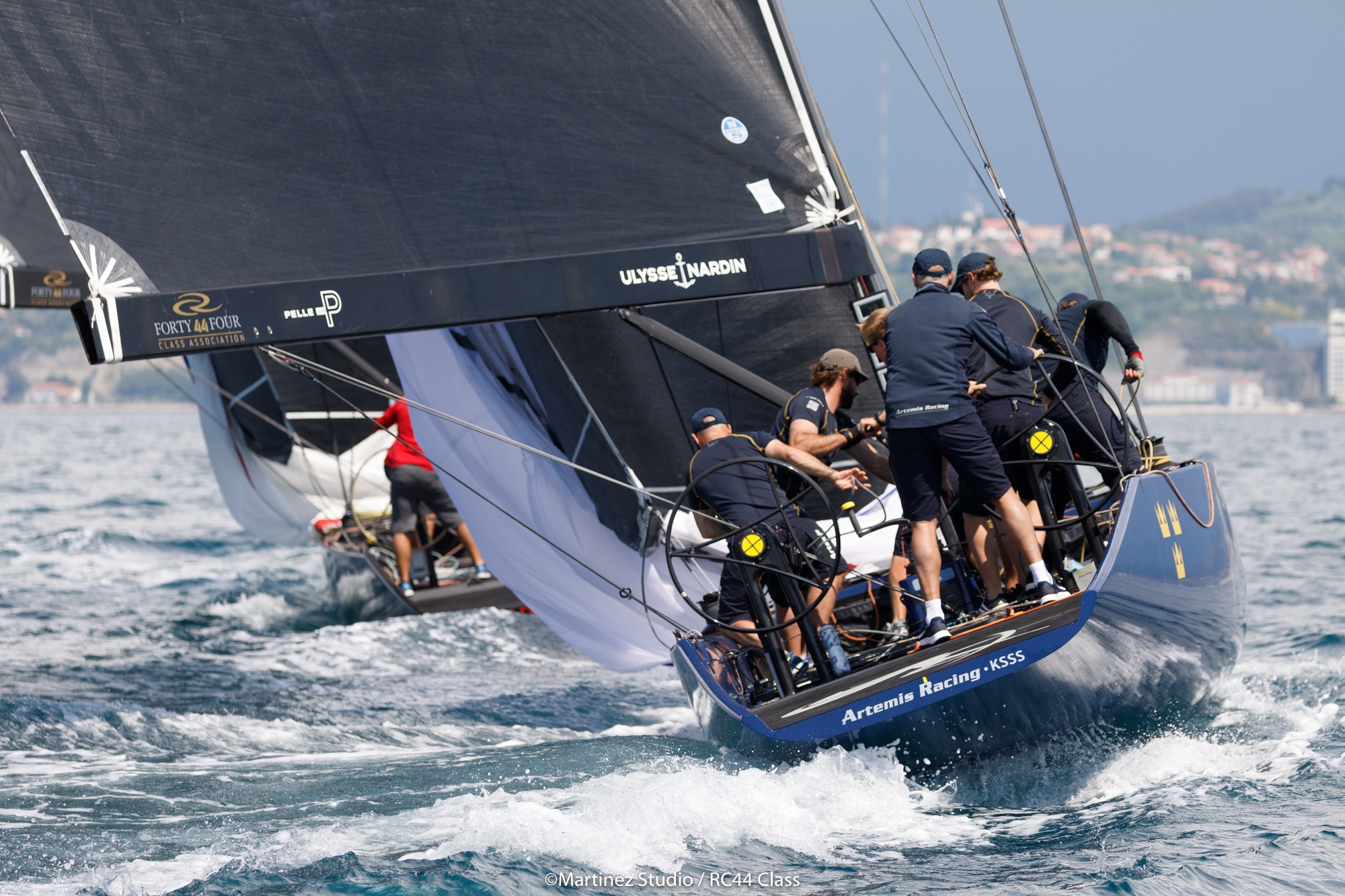 Aleph Racing followed up with a win in slightly lighter, more shifty, conditions, in race two. With the wind slowly building and backing, Artemis Racing, clearly now into her stride, claimed the last race too, resulting in her being Sunday’s best scoring boat.

“We finally were able to mix good starts with speed today,” explained Artemis Racing’s tactician Nathan Outteridge. “We could hold our lane going in the right direction and it was quite simple from there. We came out strong at the top while everyone else was fighting. It was nice to get two wins on the last day – we finished only five points off the lead!”

Aleph Racing managed to pick up the third place on the podium behind Teams Aqua and CEEREF. “We are extremely pleased and very surprised to be on the podium,” said Hugues Lepic. “Thanks for a great event and thanks to my team.”

Despite losing the regatta in its last moments, there was some consolation for Igor Lah and Team CEEREF: A sixth placed finish overall here in Slovenia, caused Nico Poons’ Charisma to drop from top of the overall 2018 leaderboard to third. This propelled Team CEEREF into the lead overall with Team Aqua second, just one point behind.

Local organiser Mitja Margon said of the event: “We had a fantastic week and almost completed the whole program. The response I have had from teams, sailors, coaches and, hopefully, the class after the event, is positive, so I am happy. We hope to come back in 2019.”