Racing in Palma in November was always going to be challenging not just for crews but especially for race officials more used to racing here in summer, in a sea breeze you can set your watch by.

Yesterday racing was canned with the breeze gusting to 40 knots. Today, despite a large residual swell, conditions appeared more sailable, but for almost two hours the wind failed to settle, its direction pulled around due to the giant clouds crossing the Bay of Palma race area. Although light to moderate, the wind randomly shifted between southwest and northwest and back before finally settling close to the former when, on their fifth attempt, the race committee was able to lay a course successfully. 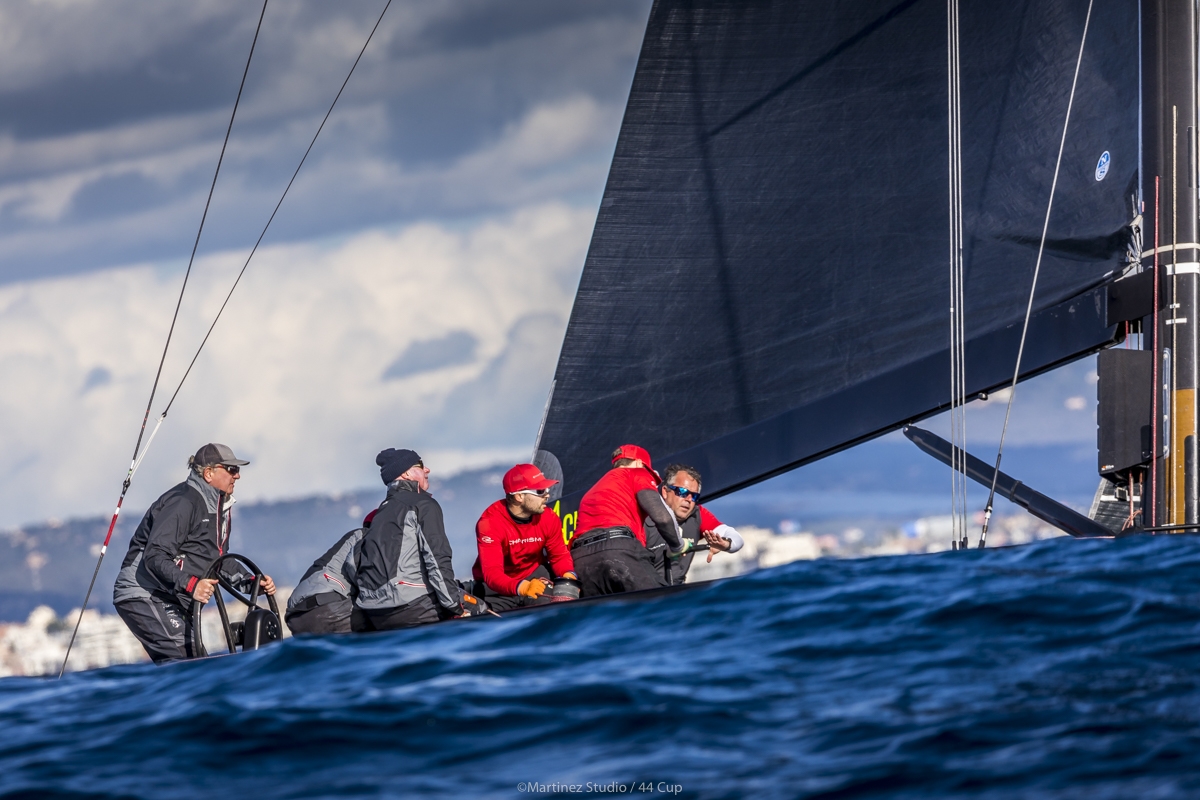 From there the day improved and the hero was certainly 2018’s defending 44Cup champion, Nico Poons and his Charisma. The Dutchman’s team, which has had an up and down 2019 season, made most sense of the tricky conditions to win both of today' first races. In the first they played the shifts in the centre of the race track and led around the top mark and were then aided by a left shift making the course more one way, thereby benefitting the leader. In the second it was initially harder when they followed Chris Bake’s Team Aqua and Bronenosec around at the top mark, but crossed ahead on the run.

“It was quite challenging, but it was okay because we were all in the same conditions. May the best team win!” said Poons, not yet contemplating a return to form for his team.

New on board Charisma for this event is Kiwi Hamish Pepper who is standing in for regular tactician John Kostecki. “It was a tough day. It was very shifty and puffy and we sailed well in the first two and got behind in the last one and when we just struggling a bit,” explained Pepper. “The boat was going pretty quick and is sailed well up and down - the guys did a good job with that and we got some lucky breaks and managed to say in front.”

The conditions did improve for race three. In this the arrival of a fresh set of clouds caused the wind to build into the high teens and there were at least three lead changes with Pavel Kuznetsov’s Tavatuy Sailing Team and John Bassadone’s Peninsula Petroleum fighting at the front on the first lap only for Igor Lah’s Team CEEREF to nose ahead going into the leeward gate. On the second beat Hugues Lepic’s Aleph Racing chose the favoured left and was ahead at the final top mark rounding before going on to take the bullet. This win enabled Lepic’s team, on which American Steve Howe was steering today, to come out on top, ending the day one point ahead of Charisma, thanks to an average result by Poons’ team in the last race.

“It was a really difficult day,” confessed Aleph Racing’s tactician Michele Ivaldi. “The wind was all over the place. There were big shifts of 30-40° and puffs coming from the sky. It was very difficult to read. Plus we were in the lee of the island and there were all of the rain clouds passing by. You definitely needed some luck...”

Meanwhile there is some concern for the two teams currently topping the 2019 44Cup overall leaderboard. Holding first place there is Chris Bake’s Team Aqua which is currently lying in last place after one day of racing, five points and three places behind their main rival for this year’s title, Vladimir Prosikhin’s Team Nika. Team Aqua’s position was not helped by their spinnaker blowing up in the second run of race two.

On the dock at the event’s hosts, the Real Club Nautico de Palma there were some minor celebrations for the Tavatuy Sailing Team crew, after their third race when they had lead at the top mark. “It was very difficult today,” admitted the Russian team’s towering tactician Evgeny Neugodnikov. “The third race as nice. We had a good start and we had good speed and were first to the top mark, but then we came third...”

Tomorrow conditions are forecast to be in the 8-10 knot range, fortunately with a much reduced sea state.