After yesterday’s multi-faceted single race, conditions settled down with a 10-12 knot northwesterly allowing three races to be held on the second day of the Adris 44Cup Rovinj. With Rovinj’s picture postcard old town forming the backdrop, the sun out and a relatively stable breeze, the 2019 44Cup’s Croatian stopover lived up to tourist board promises.

Despite the much more stable conditions compared to yesterday, the racing served up some unusual results, although the sole constant is the resilient grip the local heroes from nearby Slovenia, Igor Lah’s Team CEEREF, hold on first place. 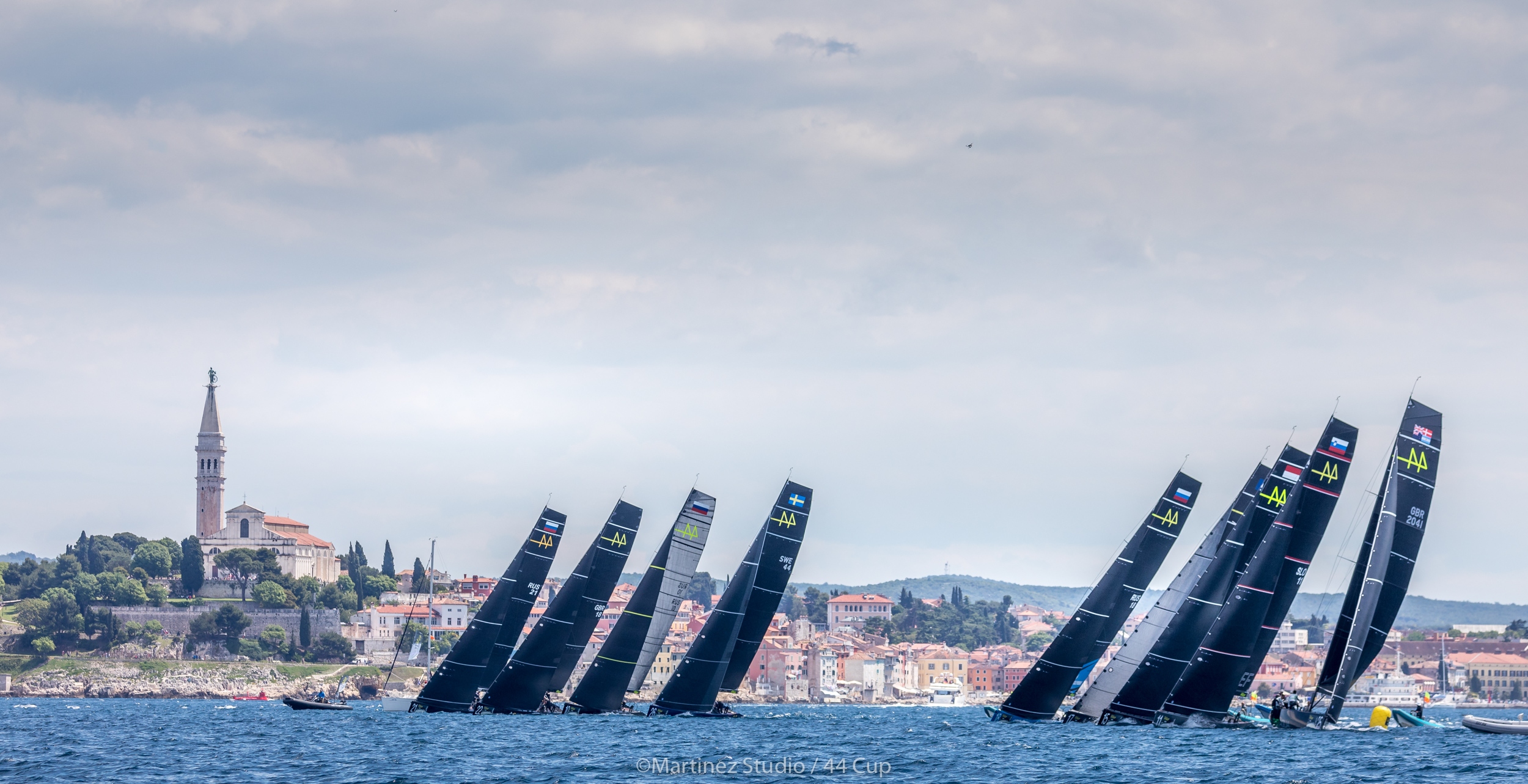 Glory boys of today were unquestionably Nico Poons’ Charisma, who managed to secure bullets in the first and last races. However these sandwiched a costly last place - the classic zero-to-hero way for which the Monaco-based Dutchman’s team is famous. “This is normal for us - I wish I knew why,” admitted Poons. “We need a bit more time to sail together, but the potential in the team is there. We are getting more stable and cutting out bad results.”

Clearly for Poons the relationship with his new America’s Cup and Volvo Ocean Race-winning tactician John Kostecki is working. In the first race Team Aqua and Team CEEREF were OCS, and the Russian Tavatuy Sailing Team led for the first three legs only to grind to halt head to wind coming into the top mark creating a similar scenario for Vladimir Prosikhin’s Team Nika coming in from astern, also down speed following a port-starboard penalty immediately before.

“We got pretty good starts, went the right way and stayed out of trouble where a lot of people got into trouble especially in that first race. That sprung us out there,” explained Kostecki, who is still coming to terms with how different the RC44’s characteristics are to the TP52 he regularly sails. “If you look at all the other tacticians here - they have a lot more experience. I am still learning a lot and am making a lot of mistakes, but we’ll get better each day.”

In race two Team CEEREF had been leading but on the second beat went left early, while Artemis Racing benefitted from a greater commitment to the right, popping them out in front. In fact going right in the northwesterly here seems to pay consistently. Artemis Racing’s tactician Andy Horton explained why: “The breeze was going left all day, but the current was less adverse on the right side upwind. We saw about 0.2 knot of difference between left and right. Later in the day there was more pressure in there too.” Artemis Racing was definitely looking faster too - Horton agreed: “The boat is going well - the boys made a couple of nice improvements on the set-up and now we are right back in the hunt.”

Surprisingly the lowest scoring boat of the day was most discreet. Aleph Racing of London-based Frenchman Hugues Lepic didn’t win a race today, and never was first to the weather mark, but always fought her way through to finish among the top three in every race. This supreme consistency has propelled Lepic’s team from eight place yesterday to a very-much-still-in-contact third at this mid-way point of the Adris 44Cup Rovinj.

“I think the crew is very confident and they’ve trained,” said Lepic. “This is an event I like because I have been here several times and at least the first time I came here it worked really well, so I have good memories of it. Our crew is in good shape. We are starting well and our manoeuvring is fine. We’ll take this, but it is only the second day.”

Tactician Michele Ivaldi explained their day: “The guys did a fantastic job and Hugues did very well. We had good starts apart from the first one. We always played the right side of the course, because there’s less current and a bit of a geographical bend in the wind, so you can make a big gain there.” He added that going into this event they have been practicing their starting and they are now reaping the rewards of this.

All credit must be given to Igor Lah’s Team CEEREF crew, who dug themselves out of several holes today, notably an OCS in the opening race. A fourth placed finish, compared to Artemis Racing’s sixth, in today’s final race saw Team CEEREF regain the lead by two points.

“The right was very strong,” said tactician Adrian Stead of that race. “We managed to get around in sixth at the top. Then at the gate we got past Artemis and into the fifth and then we got Peninsula on the last run. We made a few boat handling errors yesterday but we are really pleased. We could very easily have had a few more points, so to come off the water with just 10 is very nice.”

Tomorrow another full day of racing is forecast with a first warning signal once against at 1200.