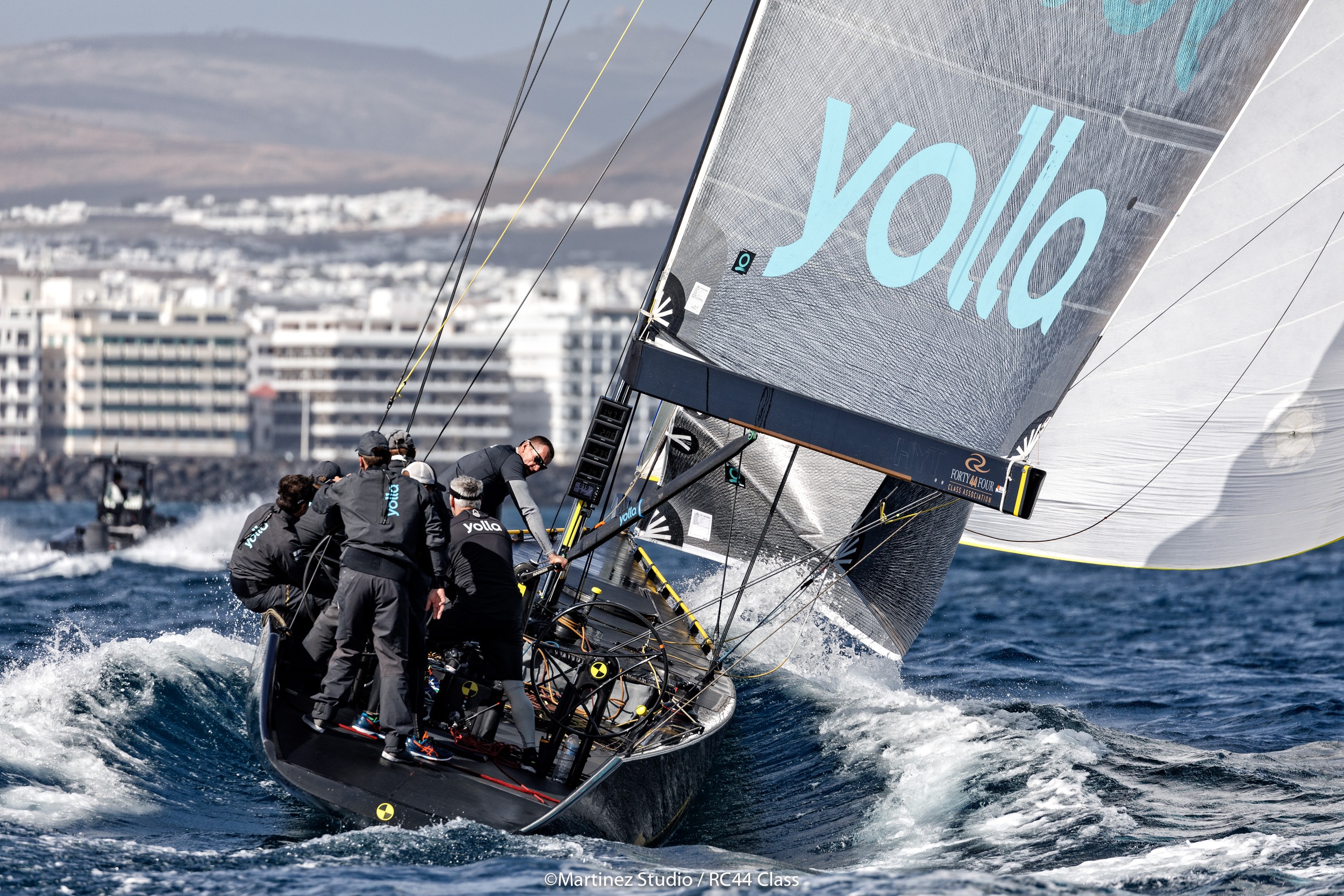 The opening day of the 2018 RC44 Calero Marinas Cup indicated firstly how close the season for the Russell Coutts-inspired one designs is set to be and how to win, it will be vital to make zero mistakes.

Vladimir Prosikhin, skipper of Team Nika, was feeling this more than most today. Having posted a 2-1 in the first of today’s three races, the 2015 champions were well positioned, holding second place at the first top mark rounding in race three, only for their gennaker to split across its head. This dropped them back to last. A slightly resigned-looking Prosikhin later explained: “We had to change the gennaker and that was hoisted without a string line and so the drop had to be done manually and was on the wrong side, so it was hard to regain any places. Fortunately we feel very comfortable on board, there is a very nice atmosphere and the boat is fast and handled well, so overall it is very enjoyable.”

Of the race they won, Team Nika’s tactician Dean Barker said they had noticed the breeze starting to clock right just before the start (this was the second attempt at getting race two underway after the first was general recalled). “Then the breeze went a few more degrees right up the beat and we had good speed and got a nice little lead around the top.” Looking ahead, the former Emirates Team New Zealand skipper added: “We’ll come out flying tomorrow and see if we can close on the front two.”

The story was similar, only on the opposite side of the race track in race one, won by Torbjörn Törnqvist and Artemis Racing. Andy Horton, veteran RC44 tactician but new boy to the Swedish America’s Cup team, explained their start: “Our plan was to get on port quick, but a lot of the guys identified a big right shift coming in, so we got off the boat end and were able to sail straight on starboard and basically went to layline, tacked and had a big leftie. It made for a simple race.”

Skipper Torbjörn Törnqvist was pleased to end the day second, just one point off the lead. “We are very happy with the speed of the boat. I haven’t sailed for six months but the guys made it very easy for me. They have done a great job. Today the conditions were great – challenging with good wind, so I am very happy to be on board again. I am looking forward to this week.” 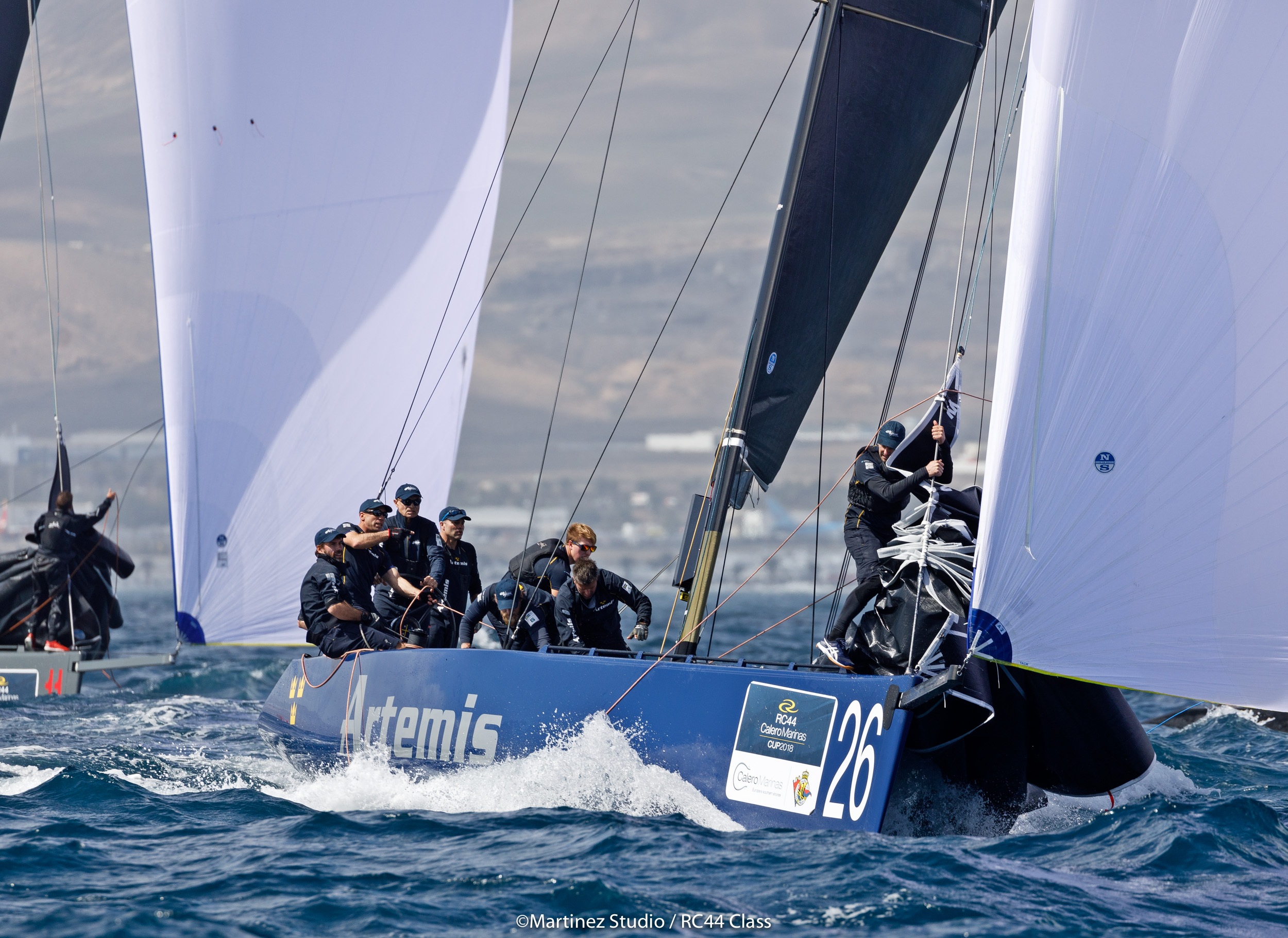 The day’s star performer was John Bassadone’s Peninsula Petroleum, leading with a 3-2-1. “All three were good races, very tight,” enthused Bassadone. “This week’s target is to try and reduce the number of unforced errors. It is going to be tough conditions, so let’s not try to make silly mistakes and try and be consistent.

“It is great to be back here in Lanzarote and the sailing is extremely close. Every boat is full of top quality sailors. I am happy, very proud of the guys and the result. Obviously it is only day one and there’s a long way to go, but we’ll take today’s performance and keep on fighting hard.”

Peninsula Petroleum’s tactician Vasco Vascotto said he enjoyed today’s shifty, puffy conditions: "There were plenty of possibilities around the course and we were lucky to have some good ones. I enjoyed it a lot. It is the first time in 20 years that I haven’t sailed for a few months. This is my first event this year! I was worried because I thought I might be rusty, but at least I was lucky!”

Again, the Gibraltar team won their race from a well calculated start, having noticed line bias favouring the pin. “I went for that, it paid and when we tacked the wind stayed left which was important,” said Vascotto.

Following the cancellation of yesterday’s practice racing as a gale battered the Canary Islands, conditions came good today, albeit remaining challenging. By the time of today’s first race, the wind was southwesterly, parallel to Lanzarote’s south coast, and had already dropped to 10-12 knots. However it subsequently built with occasional gusts of 20 knots. Throughout, race officials were forced to reset the course for almost every windward leg.

Tomorrow racing is scheduled to start at 1130 UTC, but with the southwesterly this time at the top of the range, gusting into the mid-20s.