With the incentive of playing before their home crowd here in Slovenia and also being holder of the 2016 and 2017 RC44 season championship titles, Igor Lah’s Team CEEREF tops the leaderboard by two points after the opening day of the RC44 Portorož Cup.

The morning started with an unpromising forecast and the flags barely flickering in Marina Portorož, where the high tech owner-driver one designs are moored this week. However after a delay of just 30 minutes, the on-shore west northwesterly wind filled in to 6-8 knots, ultimately enabling PRO Peter Reggio to defy the odds and successfully run three races on Piran Bay. 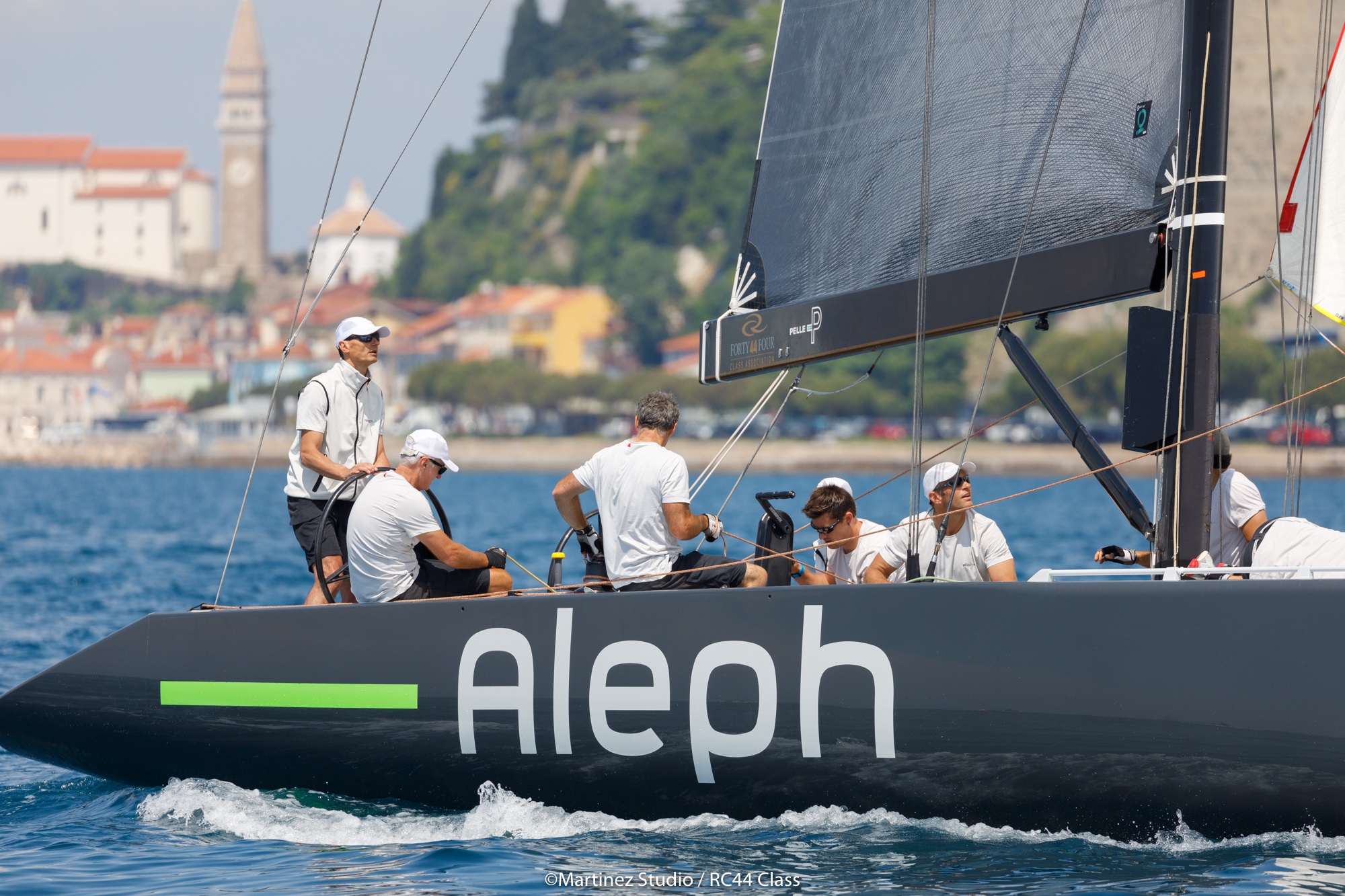 Team CEEREF’s British tactician Adrian Stead described today’s conditions: “It was very changeable on the beats and runs, so you had to set yourself up to be ready to react if one or other side started to pay. We sailed the boat pretty well today – we were pleased we managed to keep the races alive, even in the third race when we got squeezed out at the start. It was really easy to score three sevenths today and to slide down. You just had to keep battling away. It was challenging.”

Despite Hugues Lepic’s Aleph Racing leading at the top mark in the first two races, it was Team CEEREF’s crew that lay down an early marker to win race one, while in race two it was the turn of Vladimir Prosikhin’s Team Nika. While Team Nika is Russian flagged her shore manager and three of her crew are Slovenians and the owners of these two ‘local’ teams are generously hosting the RC44 Portorož Cup.

Chris Bake’s Team Aqua claimed the third and final race on what was generally a high scoring day across the fleet. For example both Teams Nika and Aqua scored both first and last placed finishes – Nika had the wrong mast set-up and a knotted spinnaker sheet which they had to knife in the opening race while Aqua was OCS in today’s second race. CEEREF was the only team to show some semblance of consistently highly placed finishes, but at the end of today her lead is still only a meagre two points.

“We’re happy - especially with the first race!” commented an elated Lah, who has been inundated with interest from Slovenia’s press this week. “But it was really tough in the light wind. You had to concentrate every second and there is no rest which is very difficult. Luigi [PRO Peter Reggio] did an amazing job – to run three races in these conditions was really good.” 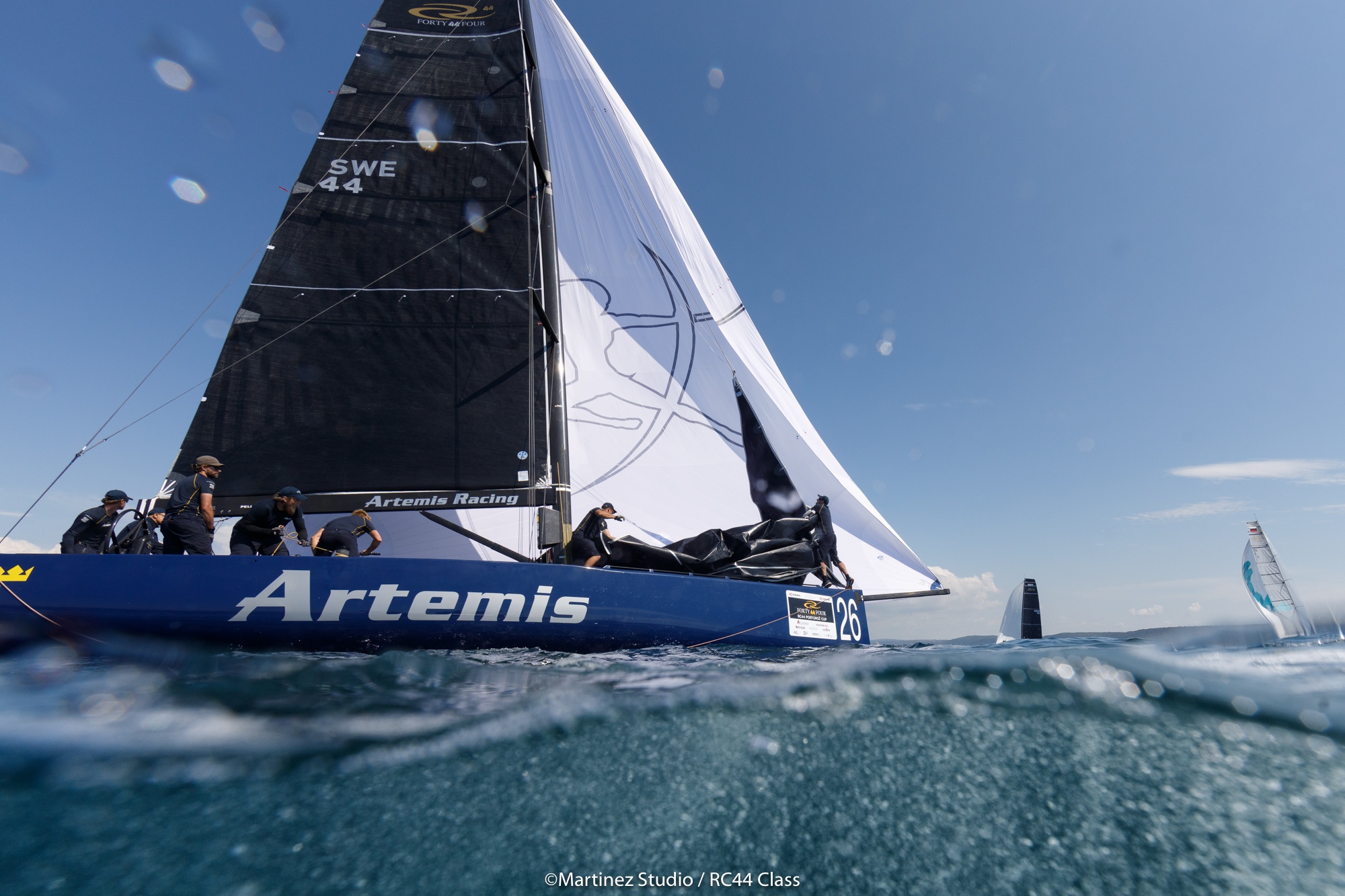 As to whether being the local boat benefitted Team CEEREF, Lah reckoned in fact probably the opposite was true. “I have only sailed here three or four times - I’ve sailed more in Lanzarote than here! Plus being the ‘local’ boat creates quite a bit of pressure, although mainly on your mind.”

Nonetheless Lah was proud to be leading: “But we have three more days and what is most important is who is leading after the last day…”

Team CEEREF did especially well today considering they were minus their Italian man mountain grinder Simone Mina, who has had to stand down at short notice this week due to a family bereavement. The crew wore black arm bands on the water today in solidarity with their team mate.

While Team CEEREF is the local team, Team Nika has more local sailors on board including RC44 Portorož Cup organiser Mitja Margon. “It is quite a tricky place to sail because it is light and there are a lot of holes on the race course which you had to anticipate,” said Prosikhin. “I think perhaps we have a bit of an advantage because at least we know where not to go! Even in light conditions it is still the best ones who win and the fleet is so strong – uniform and uniform at a very high level, which is what we enjoy. The fleet has never been more competitive.”

Due to their last place finish Team Nika ended the day third overall and on equal points with Aleph Racing, a point behind Team Aqua.

Similarly light conditions are forecast for tomorrow when racing is due to resume at 1200 CET.