CEEREF and Nika make the best in torrential Montenegro

While the forecasts had looked glum and windless, the Bay of Kotor somehow allowed PRO Peter Reggio and the race committee successfully to lay on two races on the opening day of the 44Cup Porto Montenegro.

Having been delayed for an hour and a half tied up to the dock off the Regent Porto Montenegro hotel, several teams headed out into the lake-like bay, not expecting to race, but to practice on the winds ahead of a squall line. Ultimately this southwesterly breeze held, albeit backing severely, for one race before dying on the final run. An hour later, a solid southerly filled in just long enough for PRO Peter Reggio to pull the rabbit out of the hat again, despite the tops of the surrounding mountains being obscured by low cloud and the rain turning torrential. 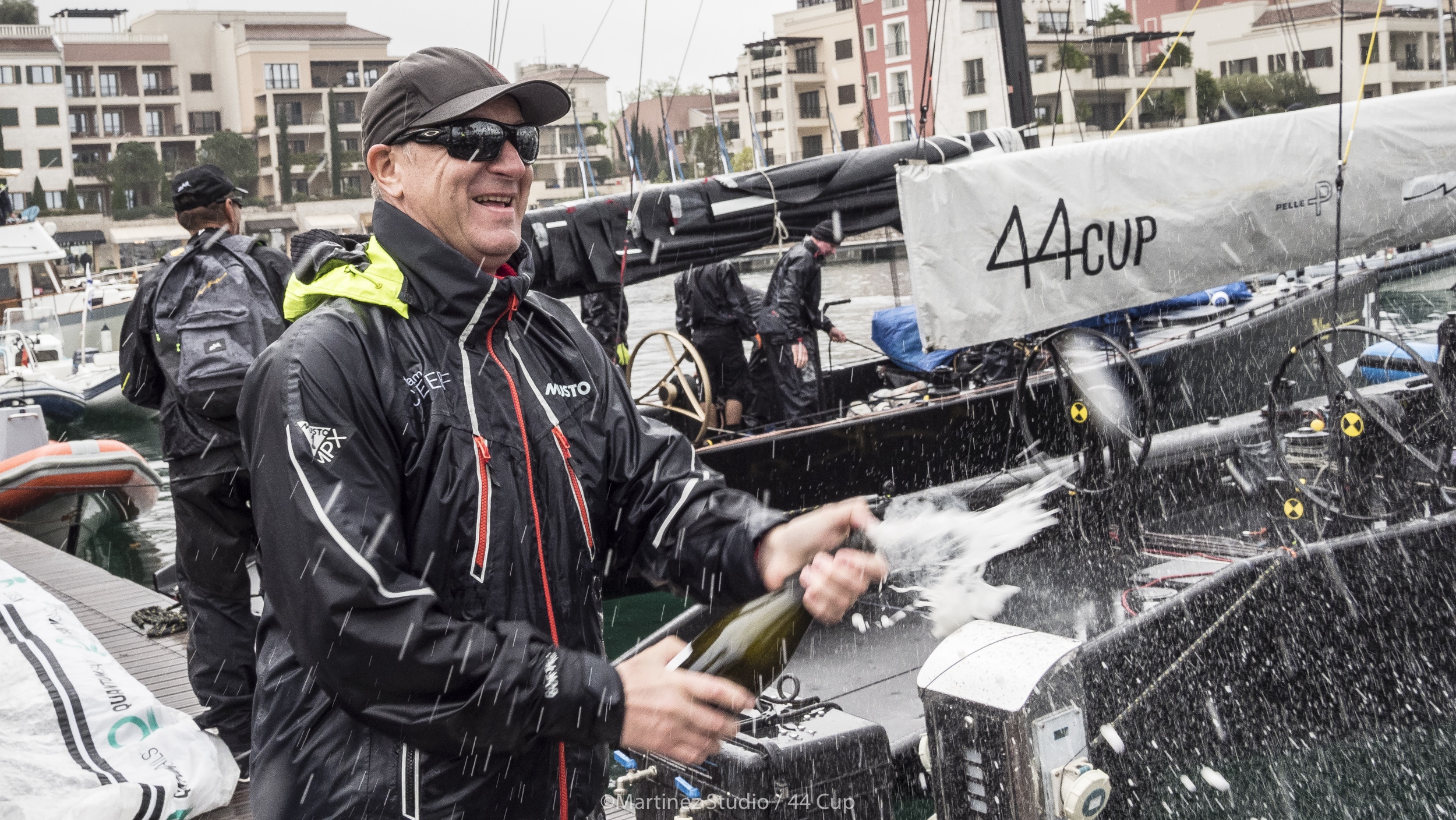 Race one saw Igor Lah’s Team CEEREF doing well on the right up the first beat to lead around the top mark from Team Nika. The wind veering hard, caused the boats to reach the leeward gate without gybing, however up the second beat the two leaders separated and, doing better on the left, Team Nika managed to bounce Team CEEREF back to the right to take the lead at the top mark. This Team Nika held to the finish as the breeze continued to clock left and fade with Nico Poon’s Charisma moving up to second at the line.

After a pause, the new southerly breeze had piped up to 15 knots for race two. In this there was an equal split up the first beat and following a considerable number of port-starboard incidents coming into the top mark, it was John Bassadone’s Peninsula Petroleum that emerged ahead with Team Nika once again doing well in second. Ultimately with the wind again going left, several boats gybed early on the final run, a move that enabled Team CEEREF and Team Aqua to overhaul the leaders and take first and second in the race’s closing stages.

As Team CEEREF tactician Adrian Stead explained of their resounding final run: “We had kept it close, snapping at their heels up the second beat and when we came around we were a little bit lifted and had a good gap to fourth so we were happy to step down and get a little separation. In the end it headed 30° down the run and both Team Aqua and Bronenosec also made gains from that: Aqua especially went from sixth to second. Sailing here is about setting yourself up so that you have a chance to gain, but you don’t make a big loss.”

Team Nika’s Vladimir Prosikhin shared his side of that last run: “We were a bit unlucky but Team CEEREF took some risk and gybed earlier and got some nice shifts or puffs and ended up ahead. It is normal in these conditions that nothing is guaranteed.

“The puffs were bigger than usual with the clouds and that made it more tricky, but it was normal sailing. In those conditions visibility can become limited, but it was good enough. We could see the marks and the other competitors.”

This season Team Nika has another new tactician following on from the likes of Russell Coutts, Ed Baird, Terry Hutchinson and Dean Barker. Now in this role is Australian Laser gold medallist turned America’s Cup and SailGP sailor Tom Slingsby. “It was great,” said Slingsby of his first day racing with Team Nika. “The racing was super tight. We had some luck go our way. In the second race we got a poor start and got to the right and it ended up our way and we rounded second. But it is going to be like that this regatta when it is so shifty and patchy – don’t rip up your tickets because there will be always plenty more positions to gain!”

On a day when the rain was causing tell tales to stick to sails being a Laser Olympic gold medallist was certainly an advantage.

Also having their first day of racing on the 44Cup was Pavel Kuznetsov’s Tavatuy Sailing Team. Calling tactics on board is top Russian match racer Evgeny Neugodnikov: “We had a nice day because we spent all the time in the middle of the fleet, all of the time fighting.” Being new to the RC44 also means they have yet to feel the pressure to perform: “We are a little relaxed and we feel freer – if we make a mistake it is easier.”

After two races, the PRO sensed his luck was running out and sent the boats in. Despite the major shifts, the leaderboard is remarkably close after day one with Team CEEREF a mere point ahead of Team Nika with Peninsula Petroleum a further two astern.

“It was difficult today,” said Team CEEREF’s Igor Lah. “I didn’t lose my grip but I was really cold. I am pleased there wasn’t a third race!”

Stead added of their opening day: “Getting two top threes was a real result. There weren’t many ways back if you got into trouble. There is a lot more for us to do.”

Racing is due to start tomorrow for day two of the 44Cup Porto Montenegro at 1130.