Uncharacteristic southeasterly winds, combined with a confused and often sharp sea, made life tough for the nine crews on day two of the RC44 Calero Marinas Cup.

While on day one there was no stand-out crew, today John Bassadone’s Peninsula Petroleum had the bit between her teeth. The first race got underway in 14-15 knots and the Gibraltarian team won the pin and, coming in on the port tack layline, led around the top mark with Vladimir Prosikhin’s Team Nika in hot pursuit. The two boats remained in front at the leeward gate where they split with, on this occasion, Peninsula Petroleum going right. Peninsula defended well and despite the wind dropping off, these positions held to the finish, with Chris Bake’s Team Aqua, overall leader going into the day, pulling up from fifth to third. 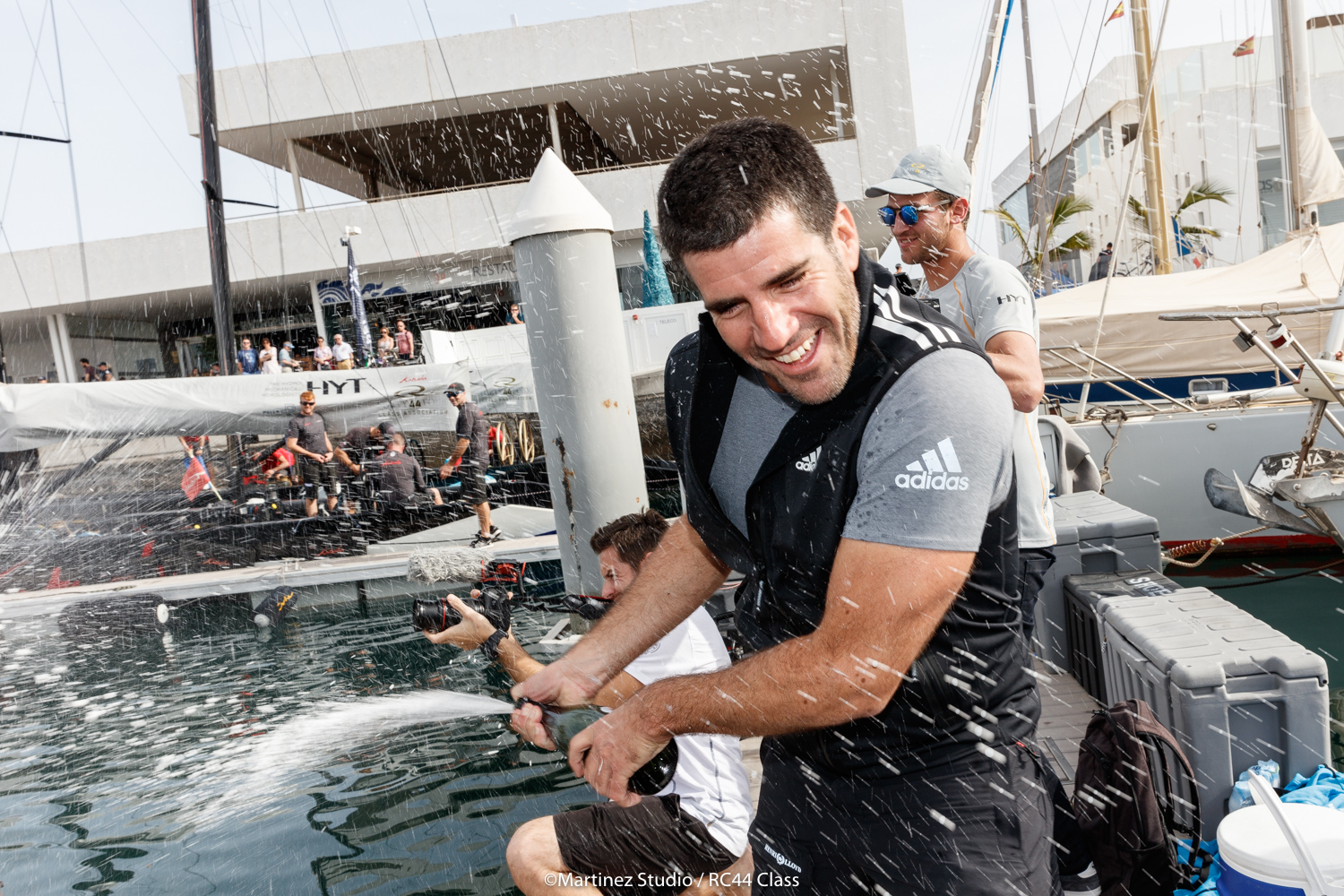 In race two, the right initially seemed to pay, but ultimately it was defending RC44 champion Igor Lah and Team CEEREF which pulled into the lead having committed to the left. However Peninsula Petroleum was chasing hard and at the leeward gate the two boats split, swapping sides, with Team CEEREF on this occasion going left and Peninsula Petroleum right. The latter option paid and Bassadone’s crew took the lead to score her second bullet.

The third race was canned when, as forecast, the wind went light.

Peninsula Petroleum’s wins occurred today despite having two helms - Alfredo Morales standing in for owner John Bassadone, who only arrived just in time for race two. “I was in two minds as to whether to let him get on with it,” quipped Bassadone of the helm swap. “But I was glad I got on board. Considering the very tricky conditions, I am very happy with how we did.”

Bassadone continued: “The guys sailed really well today from the front of the boat all the way to the back - good tactics, good sailing. Gybing on the waves was huge - we got a couple of good ones which allowed us to close up on CEEREF on the first downwind. It’s good to be back, albeit slightly stressful…” 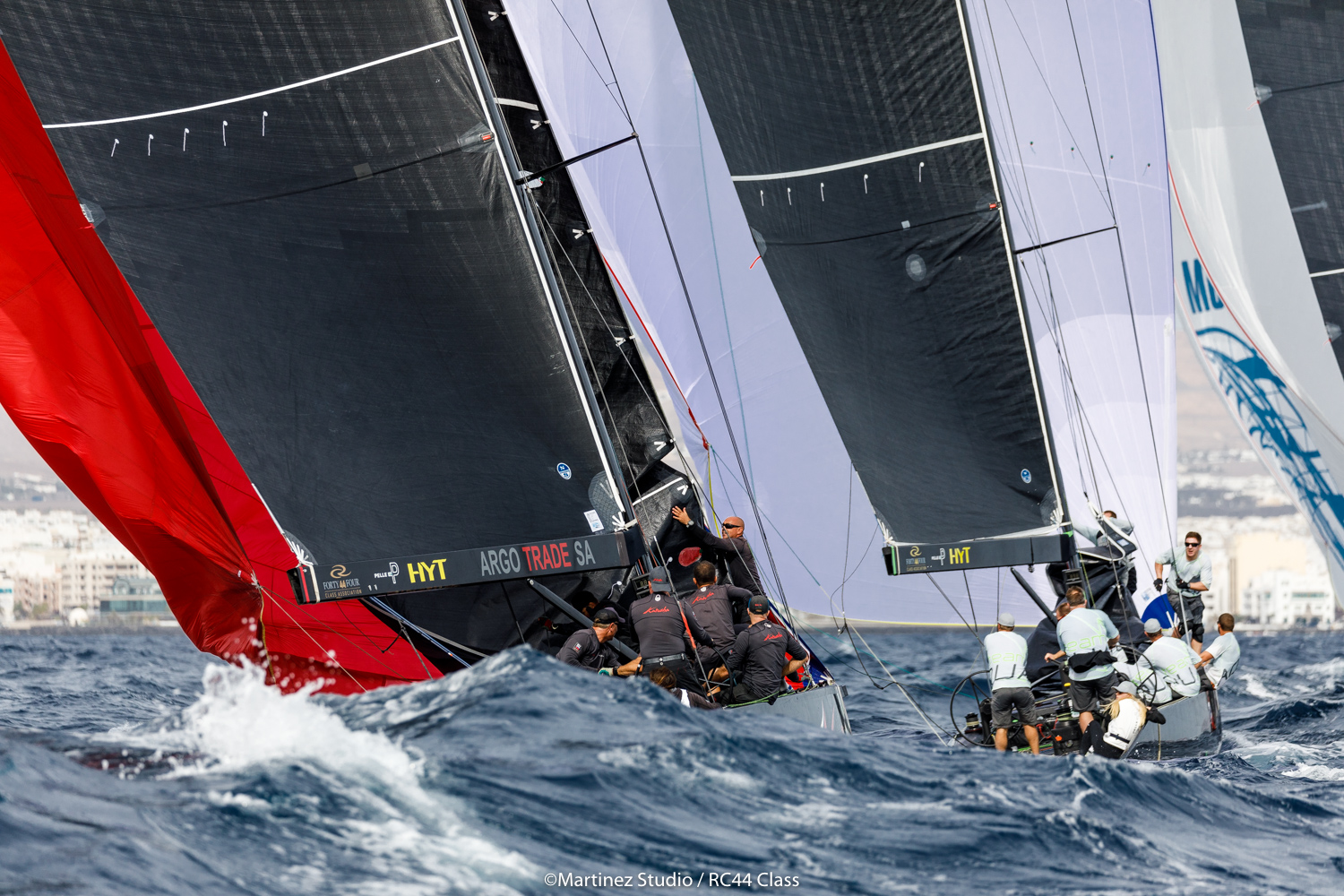 Post-racing, the team’s effervescent tactician, Vasco Vascotto, was grinning like a Cheshire cat: “We had a good day for sure. We had a clear idea of what we wanted to do. The helmsmen did an amazing job of driving the boat making it very easy for me. But while you can have days like that, you can also have exactly the opposite. So it is about being relaxed, enjoy yourself, have a glass of wine and see what happens…”

Conditions were extremely difficult with the wind often flicking hard right. But the waves being on the nose on starboard and on the port beam on port tack that made life particularly hard. Here perhaps lay another of Peninsula Petroleum’s secrets: “We set our boat up better - we had a little more power, we adjusted a bit the battens, etc. Yesterday I wasn’t happy with our speed. Today I was,” concluded Vascotto.

Team Aqua and Team CEEREF both had difficult days dropping them to third and fourth respectively. But in the bigger picture for the overall 2017 RC44 Championship, Team CEEREF is looking in good shape as Alexander Novoselov’s Katusha, with whom she is tied at the top of the 2017 championship leaderboard, is currently six points behind in seventh place.

Having a good day today was Kirill Frolov and Bronenosec Sailing Team, which despite the conditions posted a 4-3.  “It was similar to yesterday pretty much,” said Frolov. “In the second race the waves were bigger and the wind was less. It was like a washing machine out there with the waves coming from different directions. All the time it was a surprise, very difficult - not like Cascais where the waves are big and stable. Here is like a computer game, but it is okay – I like it!”

With the RORC Transatlantic Race setting sail from Lanzarote tomorrow, the start of day three of racing at the RC44 Calero Marinas Cup has been pushed back to 1230 UTC.