Day two of their 2018 World Championship will go down in RC44 history books with three races sailed in waves, and at the top of the wind range, forcing teams to break out their no3 headsails and small spinnakers.

Racing got underway on time at 1300 when the wind was already in the mid-teens. Once again the right side of the race course, close to the shore, was paying massively, offering the triple win on the upwinds of tidal relief, flatter water and a favourable right shift.

In the first race it was Igor Lah's Team CEEREF that was first to the top mark only to be rolled during the spinnaker hoist by Vladimir Prosikhin's Team Nika. From there the reigning World Champions managed to hang on to claim their first bullet of this regatta ahead of Hugues Lepic'sAleph Racing. This seemed to set them up to be the best performers on this brisk day, scoring a 1-2-3, despite having to fight back from a poor start in the final race. "We managed to turn a fifth into a third, which was really encouraging," said Team Nika's tactician Dean Barker. "It was a good day in the end." 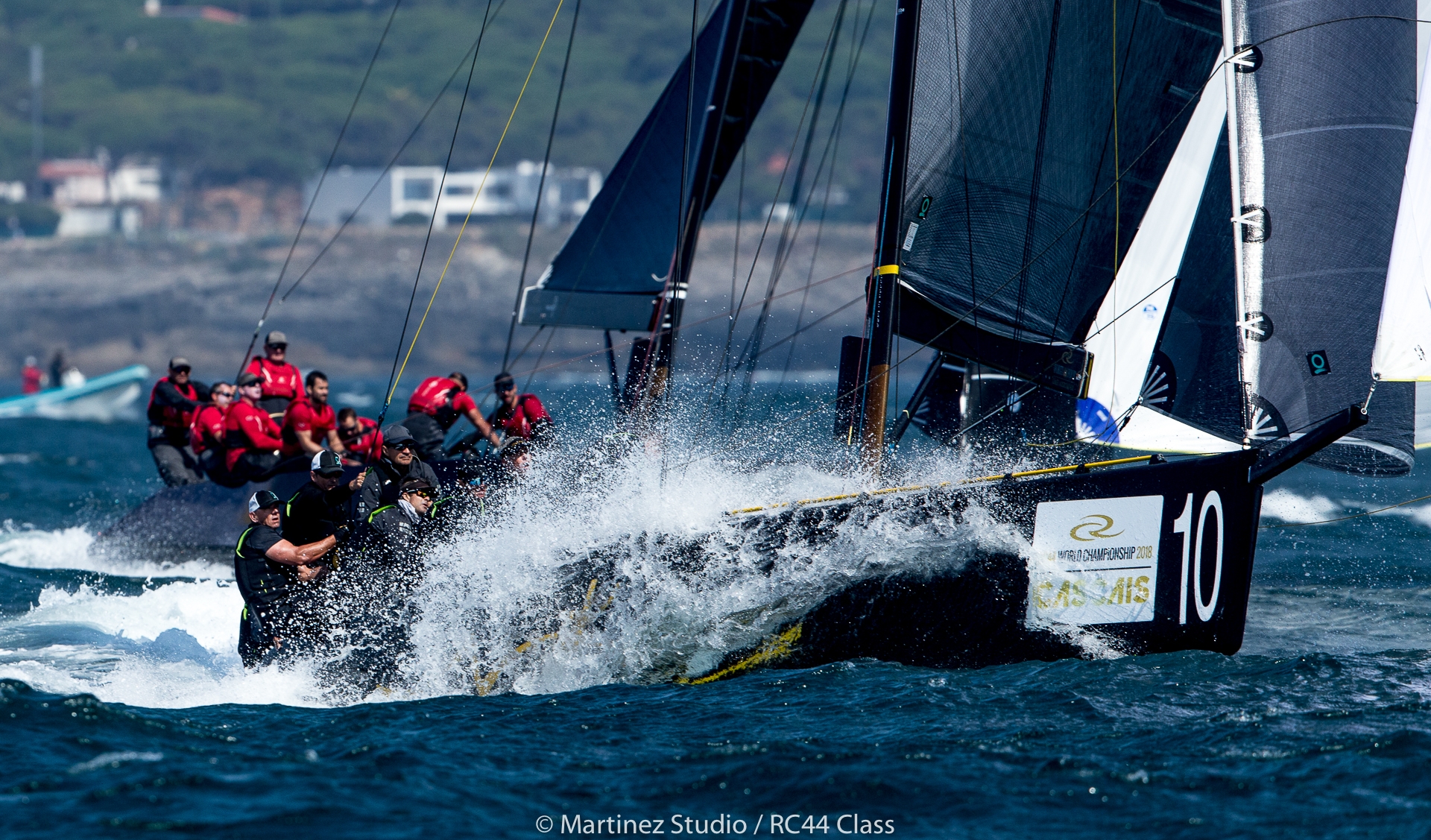 As to the conditions, the former Emirates Team New Zealand skipper, currently with the American Magic America's Cup challenger, added: "It was a true Cascais day. The course is interesting and challenging and the conditions test everyone as well." Downwind the RC44 one designs turned into rocketships, and occasionally submarines, as they tackled the growing wave state that was developing. "They are cool," said Barker of sailing the RC44 in these conditions. "You just see the smile on everyone's faces when they came in. I think we had a top speed of 23.5 knots which was great."

Like yesterday, Team CEEREF followed up a disappointing first race result (this time a seventh) with a win in the second. This came down to choosing a clear lane out to the right, not immediately out of from the start line. Once they had got into the favourable shift and tacked back, they were already considerably ahead and looked comfortable there on. "First race – it was unfortunate at the top, but that was how it was. Then the second race was great. But we want to avoid this pattern…" said Igor Lah, adding of today's racing: "We were completely soaked, but it was fun."

Artemis Racing today became the fourth boat to score a bullet when they were first home in the final race. Despite being among a tightly grouped cluster coming in on the starboard layline in this, the breeziest race of the day, the Swedish RC44 managed to nose ahead, leading around the top mark ahead of Nico Poons' Charisma.

"We were able to leebow Charisma pretty strongly out of the right hand corner. Aqua passed a little further to the right, but we were all laying," described Artemis Racing's tactician Andy Horton.

They held on from there to end the day second top performing boat behind Team Nika. "It was nice, great," said a beaming Torbjörn Törnqvist of the day's racing. "We managed to hold on, but it is so tight and the boats were chasing you down and all it takes is a single mistake and BOOM. It was an exciting day. We had some issues and our starts weren't very good at all. Our last start was a little bit better. At one point we saw over 27 knots of wind.

"I particularly enjoy days like this. I think our top speed was around 23.5 knots, which is fast. I think I've only seen that once before."

The day was not without its dramas including a man overboard and a knotted kite halyard on board Team Aqua and numerous broaches and wrapped spinnakers, especially during the second race when the crews were attempting to manhandle their larger kites through gybes in big waves and gusty conditions.

Today's results have launched Team Nika into the lead at this half way stage of the RC44 World Championship ahead of Vladimir Liubomirov and Kirill Frolov's Bronenosec Sailing Team. While two points separate the two Russian boats, there is now a six point jump back to Team CEEREF in third place, but with Artemis Racing and Nico Poons' Charisma all within four points and still with half a regatta to sail.

The forecast for tomorrow, day three of the RC44 World Championship, is for conditions to remain brisk, albeit toned down slightly from today.