CEEREF could turn 44Cup on its head

If Charisma and Aleph were the stand-out teams yesterday, today, the penultimate day of the 44Cup Palma, belonged to Igor Lah's Team CEEREF. In a return to their 2016-17 season-winning form, the Slovenian team won both of today's races. This elevated them to second overall astern of Nico Poons' Charisma which had another solid day leaving them with a six point lead going into the final day.

For the teams and race management it was another profoundly challenging day. The forecast was for ‘light but sailable’ with the breeze filling in early afternoon. In the end, the teams were sent out after being held ashore for an hour and a half, only for a storm cell to bring strong winds and lightning to the race area. As the horizon darkened the nine RC44 teams were sent in. Once the squall had passed they were called back out, but this resulted in another late day with the first race only started at 1515 CET. A second was shoehorned, but it was dark by the time the boats later docked at the Real Club Nautico de Palma. 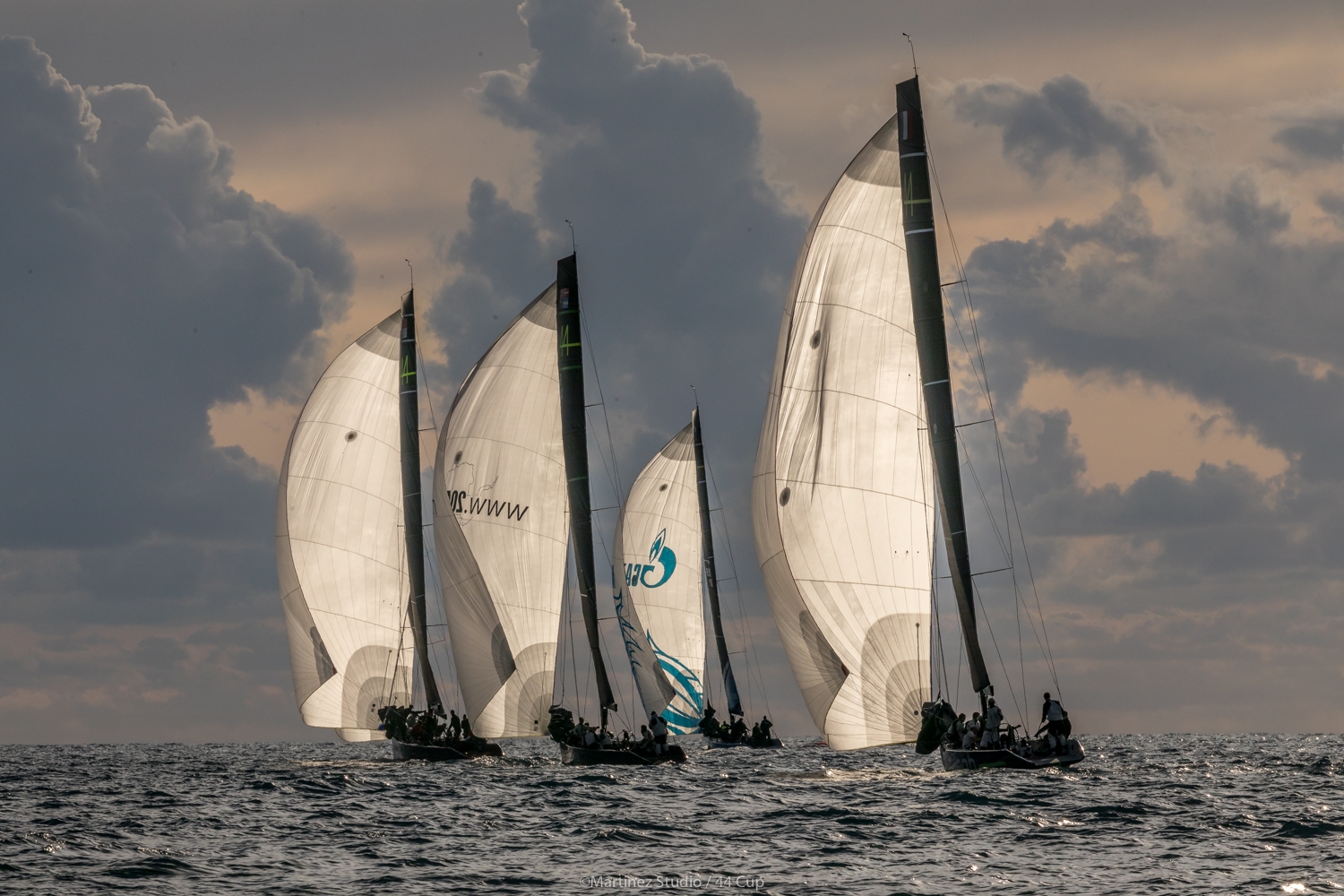 Given the variable conditions, the first beat of the first race was looking good with John Bassadone’s Peninsula Petroleum and Hugues Lepic’s Aleph Racing in front. Howver a major shift in its latter stages strongly benefitted those on the left like Team CEEREF and Pavel Kuznetsov’s Tavatuy Sailing Team which found themselves laying. Leading at the top mark, Team CEEREF sailed conservatively and extended, as did Tavatuy in second from Kirill Frolov’s Bronenosec Sailing Team which in turn managed to fend off a strongly advancing Torbjörn Törnqist on Artemis Racing and Nico Poons’ Charisma on the final run.

With the wind picking up in the second race, the field was closer up the first beat with Bronenosec leading around the top mark, but with Charisma on her transom and Team CEEREF leading the next wave, having come into the top mark on port. Igor Lah’s team split from the leaders at the end of the run managing to get inside Bronenosec Sailing Team rounding the port leeward gate mark. A couple of nice lifts up the second beat helped Team CEEREF bank her lead and from there she was unchallenged, scoring her second bullet of the day.

“I was so cold, I wanted to come in as quickly as possible!” quipped a shivering Igor Lah once ashore. “Two bullets is always nice. At least that shift balanced things up with the one where we lost yesterday.”

Team CEEREF’s tactician Britain’s Adrian Stead admitted they had been lucky with just how far left their winning shift in the first race had gone, enabling them to reach into the top mark with Tavatuy. He was pleased with how they had performed subsequently. “On the second beat there seemed to be no clear side and any bit of breeze made a huge difference. That was a nice win.

“In the second, we were third at the top and did a good set and got away from Team Nika. There were a couple of shifts and we took the transom of Bronenosec and Charisma but got around the gate in front of them. The second beat was really hard because tacking with the genoa over range is such a killer.

“It was a good day. Here at the moment it is very changeable and the clouds and rain make it very unpredictable.”

There were some incidents too. Bronenosec Sailing Team failed to duck and collided with Artemis Racing pre-start in the first race. The Swedish RC44 made it a matching pair of blows when later in this same race when she was hit a second time, this time on the bow, by Aleph Racing’s transom. Bronenosec and Aleph Racing each received two penalty points for hard contact.

Aside from her pre-start touch, Bronenosec was the second top boat today. “In the second race we led into the top mark,” commented tactician, Cameron Dunn. “We got a really nice start up at the race committee boat end and managed to control the fleet up the beat. But it was hard down the run and CEEREF did well at the bottom.”

Tomorrow not only will the 44Cup Palma be decided, but the 2019 44Cup too. This event being last of the season means that results here cannot be discarded. This is most alarming for Team Aqua and Team Nika, the two leaders in the season’s championship, as they currently lie eighth and ninth respectively here in Palma. For if today’s 44Cup Palma positions were final, Team CEEREF would be crowned the 2019 44Cup champion.

For Igor Lah this is not yet being considered: “It is one day too early to think about that. We’ll see what will happen. There are a lot more points on the table...”

To make up the schedule, racing is due to start at 1100 tomorrow.