The opening day of the 44Cup Marstrand World Championship 2019 was one of exceptional sailing conditions in 15 knot winds, under brilliant sunshine and usually on top of a short, sharp chop making for an exhilarating, if wet ride for the nine crews competing.

Despite the relatively stable conditions it was an unusually high scoring day for all but Hugues Lepic’s Aleph Racing. Winner of the last 2019 44Cup event in Rovinj, Croatia in May, the French team claimed the opening race after winning the start and making the most of the favourable left. However in the next two races they had to fight back from poor starts. With no score worse than a fifth, Aleph Racing leads the World Championship after day one. 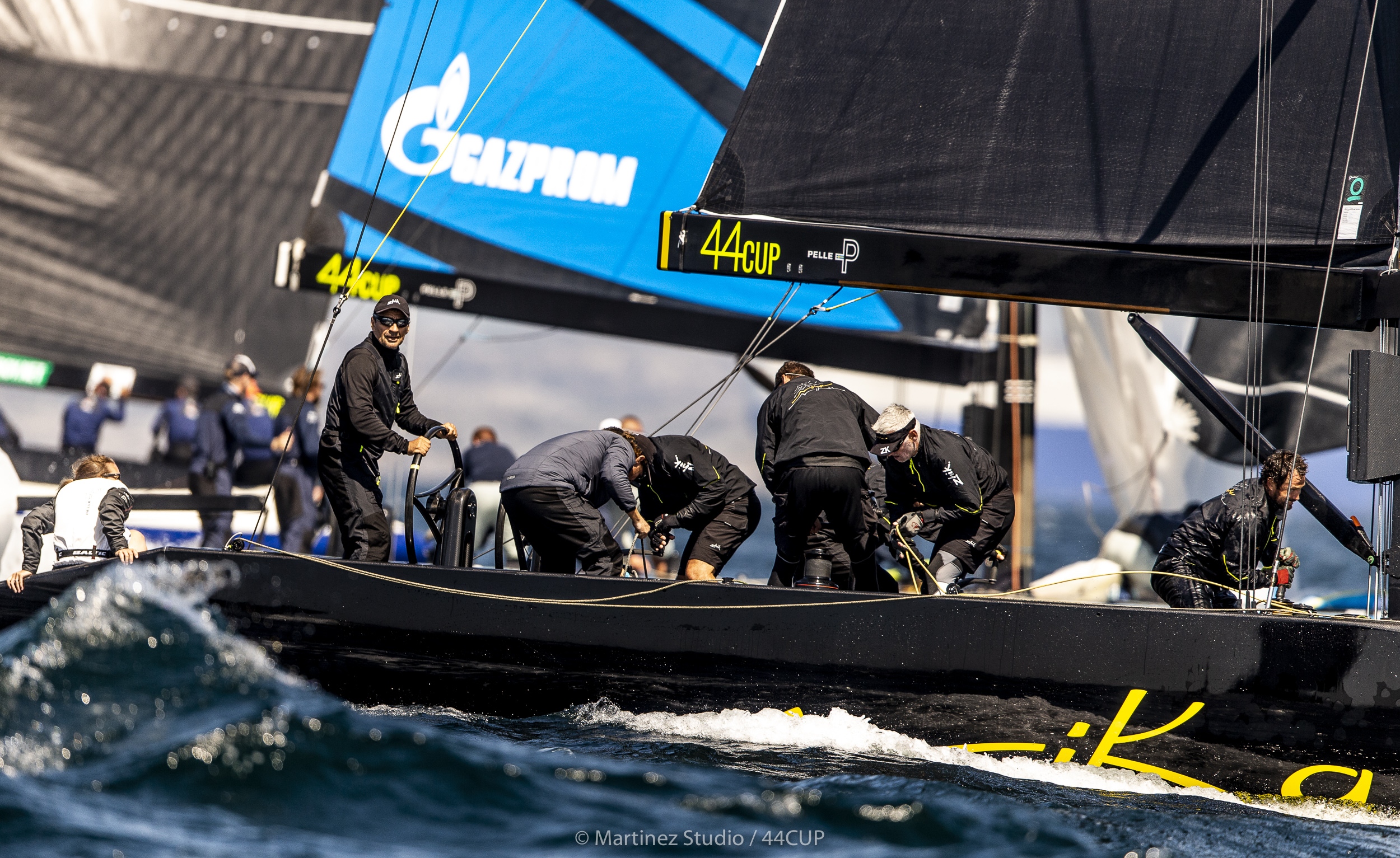 “I found the conditions tough and I think like always in the class if you make a mistake you lose two or three points and we had our fair share of that,” observed Lepic, admitting that it didn’t feel like a day they deserved to end in front. “It is always better to be slightly ahead but I am not banking on anything. At this regatta nothing is going to be decided until the last race on the last day.”

For the owners the short sharp chop made it hard, especially sailing upwind on starboard and it was vital to choose the best place for manoeuvres. Aleph Racing’s tactician Michele Ivaldi observed: “You had to be patient. If you tacked in a flat spot rather than in the chop, you gained a lot.”

At the end of day one Aleph Racing holds a significant three point advantage over Vladimir Prosikhin’s Team Nika after which it is very close on the leaderboard with just three points separating the next five.

Aside from Aleph Racing, everyone else had very mixed days. For example Team Nika was penalised in race two for a failing to give room coming into the finish line and was forced to carry out a penalty turn. “I thought we were going to cross Team Aqua and they gybed and surged on a wave and we got caught between two waves and lost a boat length really quickly so they got us,” admitted Team Nika’s tactician, Tom Slingsby. But in fact they were already down the pan: “We were third around the top and then had an issue with the hoist and then we got rolled and gybed on and gybed on. We went from third to last…”

However Team Nika redeemed herself in the final race, pulling out a significant advantage by the top mark then extending as the 44Cup fleet ended day one with a finish line inside Marstrand Fjord. “We didn’t have a good start and we tacked out early and we came back on a nice 10° shift to the right – pretty much the only shift to the right all day,” said Slingsby. “The good guys off the line all overlaid whereas we short tacked up the beat and came in on layline with everyone else behind us.”

It was a similar story for the overall 2019 44Cup leader, Igor Lah’s Team CEEREF. In the first race, while passing the inner mark, the Slovenian RC44’s mainsail clashed with the rig on Tavatuy Sailing Team, holing CEEREF’s main and causing her to pick up one penalty point. “The guys did a pretty good job of fixing it. We used every bit of tape we had!” admitted tactician Adrian Stead.

They had a similar deep result in race three when they were one of four boats pinned out to the left by Artemis Racing. Yet she sandwiched these deep results with a win in race two, when all came good, winning the pin and the favoured left side of the first beat - a duct tape-repaired mainsail clearly still fast.

Punching above her weight for a team that only raced on the 44Cup for the first time in Marstrand a year ago was Pavel Kuznetsov’s Tavatuy Sailing Team, ending the day third. She came home second in today’s second race, following similar ‘left is best’ tactics to Team CEEREF. The new Russian team also had to salvage some poor starts and this didn’t come worse than in race one when they were called over early. Standing in as mainsail trimmer and only non-Russian on board for this event, Croat Tomislav Bašić (who last sailed in the fleet as tactician for the Polish team MAG Racing) was impressed by the team on which Evgeny Neugodnikov calls tactics. “All the guys are very relaxed and think about it race by race and leg by leg. The crew is motivated, but not under high pressure.”

Similarly Bronenosec Sailing Team was second to Nika in the final race. Helmsman Kirill Frolov was delighted that the breeze was up today, following light wind events in Montenegro and Rovinj: “Today was great although it was a little bit choppy. Our starting wasn’t great but we were good otherwise.”

Three more races are scheduled tomorrow out to the west of Marstrand Island with a first warning signal at 11:30.