After a few days out on the water training here in Slovenia, owners and crews of the eight RC44s are now back in the saddle and ready for tomorrow's start of the 44Cup Portorož. The last time the 44Cup fleet raced was in Palma in mid-November 2019. A full season was scheduled for 2020 but was cancelled in its entirety due to the COVID-19 pandemic.

Formal practice racing was held in the waters off Portorož today under the command of new 44Cup Principal Race Officer Maria Torrijo, who has taken over from the revered PRO Peter 'Luigi' Reggio, who has retired after 12 years of sterling service to the high performance one design class. Torrijo comes from having most recently been Deputy Race Officer for the 36th America's Cup in New Zealand.

Despite the long break, out on the water the RC44 fleet seems as competitive as ever. "The teams are pretty close as always - that is what we have seen in training," says Nico Poons, owner of Charisma, which ended the 2019 season in fifth place overall. "We will have to see how things are going, but it is all so open. All boats can win."

Poons hasn't sailed his RC44 since 2019. but since then has raced a smaller sportsboat in Monaco, where he resides. "It is good to be back, but you do feel how rusty you are." 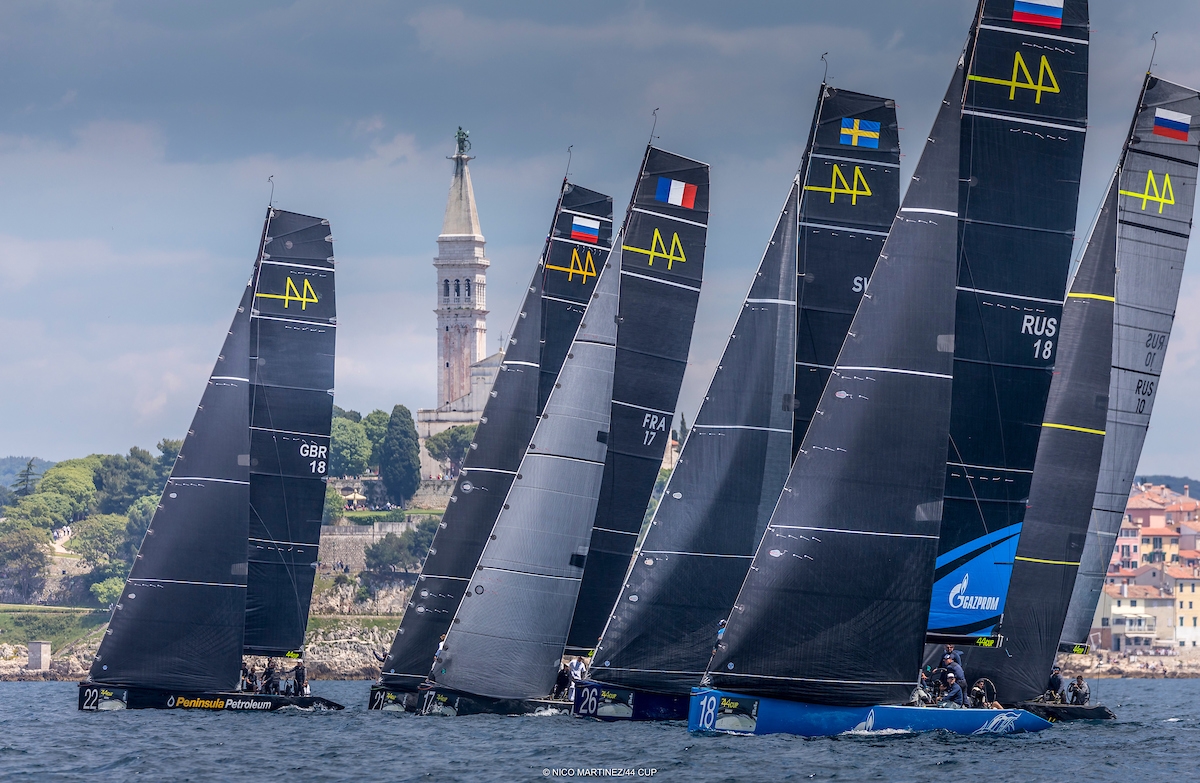 Over the seasons Charisma has earned itself a reputation for decidedly up and down results. In 2019 the Dutchman's team reached the podium at three events, but was at the opposite end of the leaderboard in the other two. According to Poons their performance depends upon the amount of wind. "When I look at the results it seems we need more breeze, but we have to deal with what there is, all kinds of circumstances. Portorož is a nice place, but last time we were here we had very little wind, which was very frustrating for us. If we have a bit of breeze it is a great place."

Fortunately Poons could be in luck, following a light first day of racing tomorrow, moderate wind is forecast for Friday and Saturday, ending the regatta with a challenging 20+ knots on Sunday.

The owners are all working with much the same heavily qualified tacticians, including Hamish Pepper on Charisma; Cameron Appleton with Chris Bake on Team Aqua; Michele Ivaldi with Hugues Lepic on Team Aleph; Andy Horton with Torbjörn Törnqvist on Artemis Racing; Adrian Stead on Igor Lah's Team CEEREF and Evgeny Neugodnikov on board Tavatuy Sailing Team. Joining this elite group is Spain's Manu Weiller who has taken over from Tom Slingsby calling the shots on Vladimir Prosikhin's Team Nika

For former America's Cup winning helmsman Ed Baird, tactician on John Bassadone's newly rechristened Peninsula Racing, the 44Cup Portorož is his first regatta outside of the US since lockdown began at the beginning of the pandemic in the spring last year.

"It is so terrific to be back sailing," says Baird, who was last in Europe with Bassadone's team in their base in Sotogrande training in March 2020, when he had had jump hurriedly onto a flight back to his native Florida before travel restrictions came into effect. 14 months on, Baird says "it is interesting - we have basically the same team, so that should go smoothly, but we have changed around the positions a little bit, so we have guys learning new places on the boat. There is definiately a little rust we have to smooth out."

Baird is pleased to be back in Portorož, which is where he took over as tactician on the Gibraltar-flagged RC44 three years ago. "It is very active here, with a lot of people usually watching and enjoying the activites. It is really great to be back, but this year is different." Following the pandemic tourists have yet to return to Portorož and its picturesque, ancient neighbour Piran. The spectacular festival the organisers had planned for here have had to be put on hold for some other time.

The man with a target on his back is of course the 44Cup's own Slovenian owner-driver, Igor Lah. Not only is he the local hero and backer of this event with Team Nika's Vladimir Prosikhin, but also possesses the 44Cup's golden wheels, having won the previous season. "We have had them at the end of the season three times," says Lah. "This time we hope to hang on to the golden wheels."

Otherwise, Lah expresses the sentiments of all the fleet: "Finally we are back! We were all waiting. I am really happy and it is good that we postponed by one month so we could do it. We needed to get back into it."

After a few days of training, Lah reckons they are close to the level where they left off in 2019, "but I am sure the other teams are similar, so I don't think there will be a big difference. We will still be aiming for the top. Luckily I have the same crew, which helps a lot. If you have a lot of changes then for sure you need one or two events to get in a good place."

Racing proper for the 44Cup Portorož gets underway tomorrow, Thursday, at 1200 CEST.